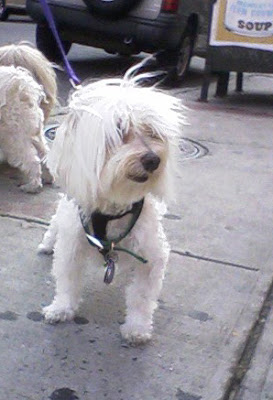 Yesterday I was walking in the East Village, and I happened to see a person with two little maltese dogs. This made me think of my TTouch client Mr. Prince, who I worked with some time ago. He was a very very shy guy, but TTouches, a Thundershirt and a bach flower remedy were helpful for him, and I showed his person Mary how to do some TTouches with him.

Well, it was just one block later when suddenly who did I see but Mary walking down the block with Mr. Prince and his two doggie "sisters"!

It was great to see them all, and I was so happy to see that Mr. Prince looked very calm and confident, not an easy accomplishment for a shy dog on the streets of New York. Mary told me that during thunderstorms, she doesn't need to use the Thundershirt with him any more. He must have gotten accustomed to the calmer feeling that the Thundershirt was helping him with during these times. This was so wonderful to hear.


Another interesting story Mary told me was that they had been visiting with an elderly woman (101 years old!), who was a bit nervous and disoriented after having traveled quite a ways. Mary said that Mr. Prince was a bit nervous too since he was in an unfamiliar place. The woman instinctively began very gently stroking Mr. Prince's ears. In TTouch, gently stroking the ears is something do because there are many acupressure points in the ears, and the ear strokes can be SO calming. In no time, both the woman and the dog had calmed down :)

Great to see you all! And thanks Mary for continuing to work with Mr. Prince, it has made such a lovely difference with him. 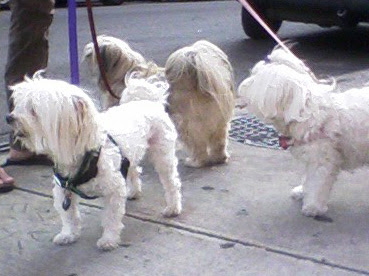