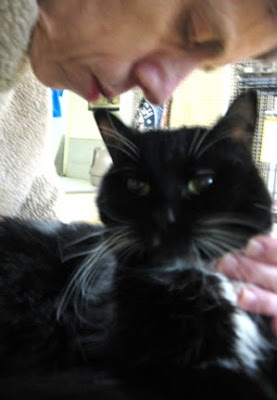 Adele was a gentle, sweet lady - one of the most unassuming beings I have met. Her owners had moved away, and she arrived at BARC many months ago at 15 years old and with a number of health challenges: hyperthyroidism, kidney problems, and possibly a tumor. She was kept in as good condition as possible with medication, hydration, monitoring of her food intake, etc. She was well-taken care of by BARC staff, vets and vet staff, and BARC volunteers. She was much-loved by everyone and I would often arrive at the shelter to see her on someone's lap. 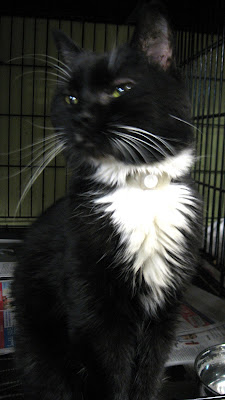 She touched my heart so deeply, this beautiful, graceful soul who was so grateful for every bit of attention she got. Sometimes she would show her gratitude in such sweet, gentle ways: extending a paw, sometimes putting both paws up on my chest, and occasionally she would do a little "circus cat" move where she would put both paws together and move them up and down.

She went through phases where she seemed to feel better and phases where her energy seemed low. She was very responsive to Reiki - for a long time, she would come right out on my lap and I would do hands-on Reiki with her. She would stretch out and really relax into it. Later on, when she wasn't feeling so well, she would stay in her cage, and I would hold my hands slightly off her and I would feel her connect with the Reiki energy and become very comfortable. Nearly always, afterwards she would want to eat, which was great, because it was hard for her to keep her appetite up. I would always mix different treats with her food to help to get her to eat. 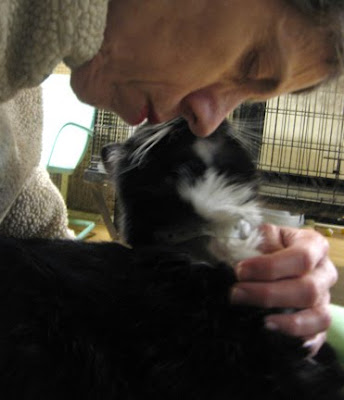 I always looked forward to spending time with her, though at times I would become conscious that, though she had her better days and worse days, she did seem to be on a gradual downward slide, as her physical issues were taking their toll. Through it all, though, she maintained such a sweet, gentle spirit, as though to say to me, "hey, it's ok, don't worry about me." Above you see her giving me a kiss, after a Reiki session.

Right about the same time it became apparent that Animal's condition was deteriorating, it was apparent that Adele was reaching the time for her gentle exit. So, the same Thursday when I said goodbye to Animal, I also said goodbye to Adele.
I spent time with her twice while I was there, for a longer while when I first arrived, and a shorter time right before I left. She seemed to want to remain in her cage, as her energy was very low. So I reached in and offered her Reiki from just a short distance off her body. I felt such calm in her.

I told her it was ok to leave her body. I thanked her for teaching me so much, and thanked her for her gentle sweet spirit. I wanted her to know that she was not and would not be alone. I told her she would be surrounded by angels and light. I told her how loved she was.

Thanks to all the BARC people (staff, volunteers, veterinary folks, etc.) for all you did for her and for all you do for the animals every day.

I will miss you greatly Adele, and think of you often. A gentle hug to you, sweet lady.

Posted by sarahsuricat at 9:14 AM