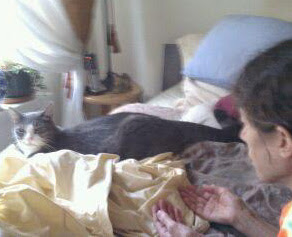 I have been doing ongoing Reiki treatments with my friend Jordyn Thiessen's (http://dancingminddesign.com/) cat Jinx, as he has been having trouble walking and using his hind legs, due to either a disc problem or tumor. In general, though of course it is apparent that this issue is troubling to him, he seems to generally be more alert and more engaged in the activities he enjoys, and can get around, though he is wobbly. I have showed Jordyn a number of the TTouches so that she is able to do them with him as well.

Today Jordyn took a number of photos (thanks Jordyn!) and so the photos pretty much show the story of what happened today during the Reiki session. 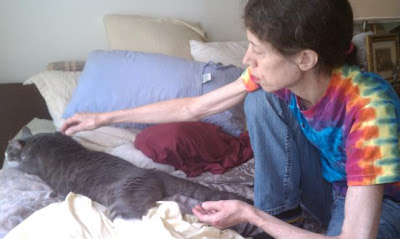 As I usually do with Jinx (and with most animals, unless it is clear that they are comfortable with hands-on Reiki), I started out a short distance away from him, offering gentle Reiki energy. He had his back end closest to me, which was interesting, as this is the area which is giving him trouble. As time passed, he eased more and more into the energy, so I got a bit closer, keeping one hand still facing his back end, and the other slightly over the area of his heart chakra. 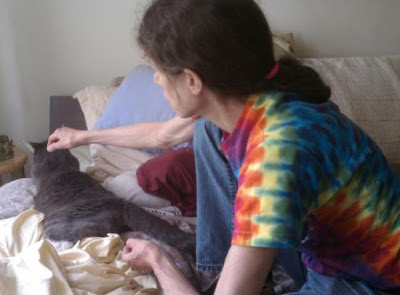 Gradually he turned around and faced me, and I continued to move gradually closer, as he seemed more comfortable. 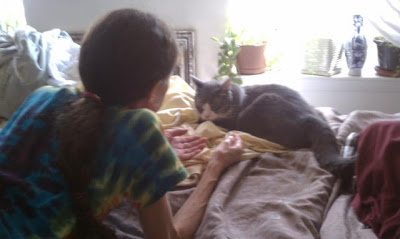 He has very big, soulful eyes, and it is very intense sometimes when our eyes connect with each other! 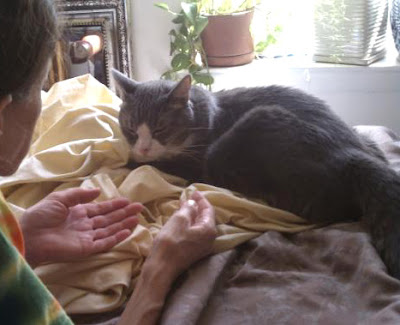 At one point, as he often does, he extended one of his front paws out to me, to make that connection for a while. And as we continued, he contined to relax and stretch out. 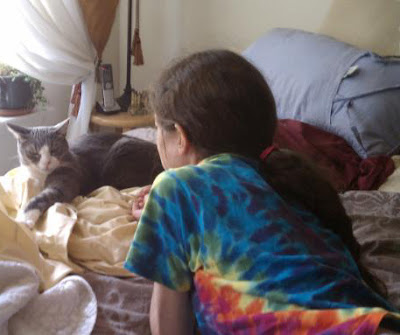 much love to you Jinx, look forward to seeing you soon!

Posted by sarahsuricat at 2:51 PM