Today I went again to work with my friend Jordyn Thiessen's (http://dancingminddesign.com/) cat. He has been losing mobility in his hind legs, and the vet thinks it is either a disk problem or a tumor. I have been doing Reiki treatments with him, which he has been very receptive to. I have showed Jordyn how to do some TTouches, and she is also doing some Reiki with him. She is also giving him a homeopathic remedy from the vet.


When I saw Jinx today, he came out into the hall when I first arrived, which is something he loves to do, so that is a good sign. It is not easy for him to get around but he is a trooper. It was good to see him engaged enough to want to try to move around as best he can. After a bit, he settled on the bed and I was sitting very near him. 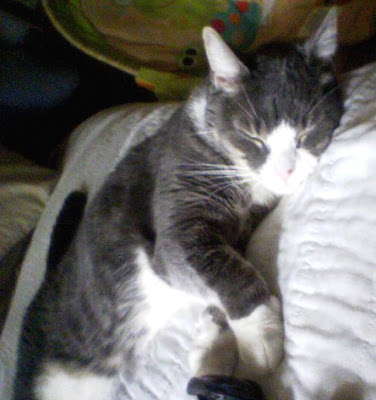 I started out doing Reiki with him from a short distance away, so as not to overwhelm him by doing hands-on right away. He had just had his homeopathic remedy, which helps him to be very relaxed. Initially he was facing me. I had my left hand near the front of his body on the right side and the right hand was a few inches from his body, maybe 2/3 of the way down near the sp chakra but off to the side. I saw him start to stretch out, and he draped his paw over my wrist. I think every time I've been there, he has wanted to make a connection using his paw. Later in the session he actually stretched his front leg and paw out, so that his whole front leg and part of his body were draped over my arm, his head very close to mine. This was so sweet, I could really feel him relax into it. We remained in this position for quite a long time, with much of his body draped over my arm.


When he had enough of receiving Reiki from this position, he got up, turned his body completely around and stretched out again, so that my hands were close to his back legs, hips and lower back. It felt clear that he wanted me to send the energy to that area. This was interesting, as sometimes it is too intense for the animal to receive directly in the area which is an issue.

So I did continue sending him Reiki from that position, so it was directed at the legs, lower back and hips, but I kept my hands a few inches away, so the energy would not be too overwhelming. I tried at a couple of points to see if hands-on would be comfortable for him, but it was clear that he was more comfortable with the gentler feel of my hands being further away. 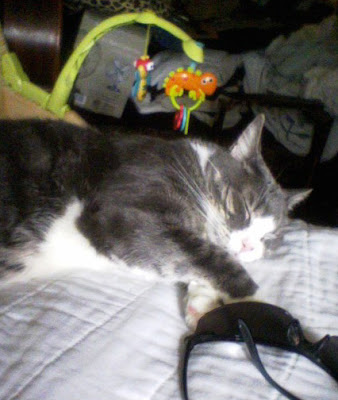 As we continued, I told him he was very loved and very safe, several times, and I saw him really let go as he heard these words. 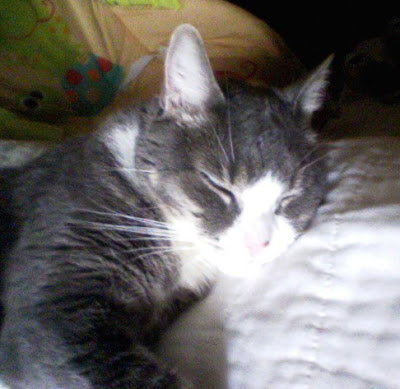 After quite a while, he adjusted himself til he was in another position, this time sort of sideways to me. It felt like we were reaching the end of the session, so I did did a little more energy work in this position, and then finished up the session. It was such a pleasure to see him so relaxed and peaceful. Thanks so much Jinx, look forward to seeing you soon, xoxo

Posted by sarahsuricat at 12:56 PM