Sadly, we had to say farewell to two of the cats at BARC shelter in this past week, Animal and Adele. The shelter did everything they could to help these cats, giving them wonderful veterinary care as well as so much loving care from the BARC staff and volunteers. But their diminishing quality of life had come to the point where the kindest thing to do was to let them go. As each one of these cats was so special, I am doing a separate blog post for each. 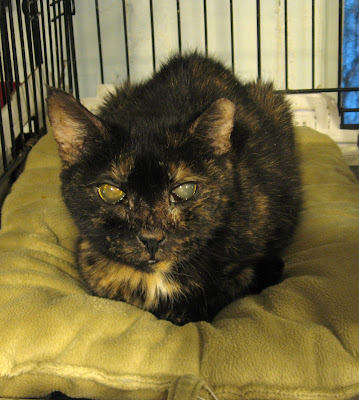 Animal was a very shy but sweet little tortie cat who arrived last October, along with a number of other cats, after her owner had passed away. She was blind in one eye (and I'm not sure how well she saw with the other eye), had ongoing digestive issues (which they later thought was probably irritable bowel disease) and was very timid. The shelter gave her medication and special diet, and, though she was very shy, she got much care and attention from staff and volunteers.
Soon after she arrived at the shelter, a couple of the volunteers and I gave her and a few of her housemates a bath. This felt to me like the beginning of a real bond with her, as we washed and gently dried her.
I worked with her consistently, using the quietest of quiet energy, offering her both TTouch and Reiki, and little by little she grew to trust me and to recognize and respond to my touch. Sometimes she would initially start to run away, probably as her vision was not good, but once she felt my hands she would settle right down, literally settle herself in my hands. I felt her absorb and settle into Reiki with me, and then I would do gentle TTouches on her, and she would rub her face against my hand. She was so sweet and because of her coloration and petiteness, to me she looked like an adorable little bear. For a time she rallied, her coat becoming more smooth, and she gained some weight and would sometimes even get playful.

I found that the zigzag TTouch was especially comfortable for her, she would start rubbing against my hand and against her cage as I did this. She also found TTouches and strokes with the jelly scrubber to be soothing. And she grew to recognize the Reiki energy right away, and would settle right into it. I felt such a strong bond with this gentle little creature. 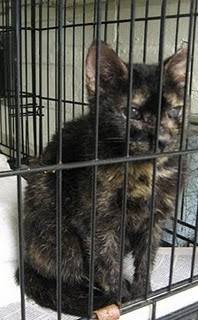 Then, they put her together in a cage with another kitty from her original household, Camilla (pictured below). These two grew closer the longer they were together. Camilla is also a petite little cat but of a quite different personality -- very outgoing and always ready to sit on someone's lap. I am quite bonded with her as well. Camilla was in tough condition when she arrived at the shelter but seems to be doing great now. 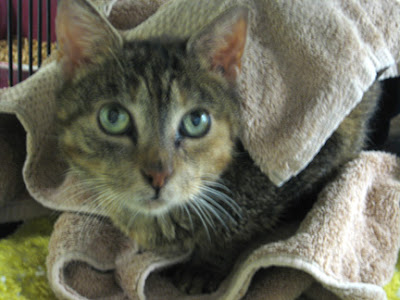 As Animal's health began to decline in the past weeks, Camilla showed Animal such kindness. When I opened their cage to offer Reiki to Animal, instead of Camilla wanting to sit on my lap at the same time (which was actually ok, I had one hand on her and one on Animal, sending Reiki to both), she cuddled in right next to Animal as I did the Reiki treatment. Camilla would snuggle up to Animal more and more as time passed. It felt like she knew exactly what was going on, and wanted to offer her comfort.
So when I went to the shelter last Thursday, I knew I could not be there on Friday and also knew it was quite possible that both Animal and Adele could be euthanized soon. So I said goodbye to both of them.

The goodbye with Animal was so sweet. She settled in to receive Reiki from me with my hands just a little off her. She had gotten increasingly frail, so it was more comfortable for her to receive the energy in a bit less intense way.

Camilla nestled in my arms and right next to Animal, like all three of us were part of the light and energy. I kept telling Animal it was ok to let go, that she was going to be with the angels, that she would be reunited with her owner, that she would be free. I told her she was very loved and she was very safe. I told would miss her so much, but that she could contact me any time (from the spirit world).

I felt some of her energy starting to go out and up, as though she was already beginning to transition. I felt very sad to be saying goodbye to her, but knew that it was the kindest thing for her to be let go.
Thank you Animal, for teaching me so much with your gentle, sweet spirit. and thank you to all the BARC staff, volunteers and veterinary folks for all your care for her and the rest of the animals at BARC.

Posted by sarahsuricat at 9:27 AM