Reiki with Jinx, Closer and Closer 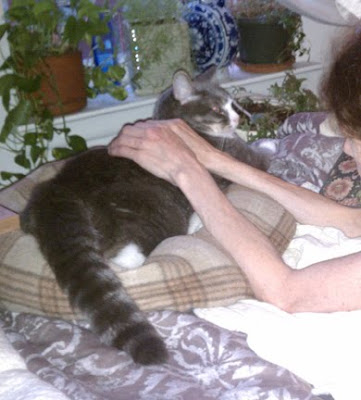 My friend Jordyn Thiessen's (http://dancingminddesign..com) cat Jinx has been having some trouble using his back legs, either due to a disk problem or a spinal tumor, so I have been working with him, mostly with Reiki, and have been doing some TTouches with him. Jordyn has also been doing some energy work with him, as well as some TTouches which I have shown her.
When I entered Jordyn's apartment for my session with Jinx on Wednesday, at first he was eating. So I just very gently sat down a couple of feet away and began sending him Reiki energy. After he finished eating I did a few Touches with him as he was turning around and starting to settle. Then I backed off a bit til he sat down comfortably. Still wanting to keep a gentle approach (especially as he is quite sensitive) I started out doing Reiki from about a foot away, then got gradually closer. 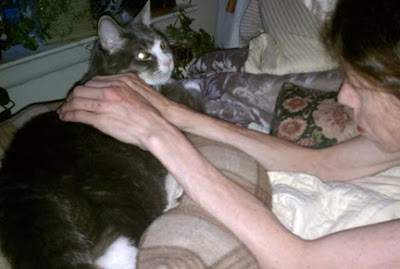 As he had done before, at ont point he put his paw on my hand to make a connection. I felt him more sensitive today, and his back twitched if I got too close. Ao I stayed a short distance away for a while. Eventually, he began to settle more and was comfortable with hands-on Reiki. I had my hands over his heart chakra area for a while (on the back a bit below the neck), stayed there for a while, then put my other hand over the solar plexus chakra (more towards the middle of the back). He really settled into the energy, his eyes closing, his body stretching out and he went to sleep. After a long while, he got up and moved a bit, so I wanted to see if at that point he would be more comfortable with my hands about a foot away from where he was. I felt him continuing to absorb the energy from that position, so I continued with him there.

For those unfamiliar with chakras, they are energy centers in the body. Just to sum up, the solar plexus chakra relates to the digestive system, nervious system, metabolism and emotions, and is a center of personal power and will. The heart chakra relates to divine and unconditional love, as well as circulatory and respiratory system, etc. You can find a lot more info on the chakras in books and online. Sometimes I am guided to chakras by my intuition, other times, I will work with specific chakras which relate to an issue the animal is having. 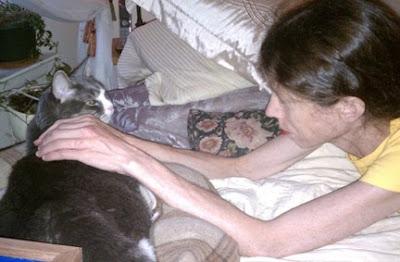 Out of curiosity, at one point I touched one of his front paws with my finger and he wanted me to stay there, moving his paw around my finger a bit like he was holding it. It is interesting, since he is having trouble walking, that he would want to make the connection there. When we finished, I felt he was SO relaxed, I felt him really let go. I feel he is very much craving peace and quiet as much as possible now. 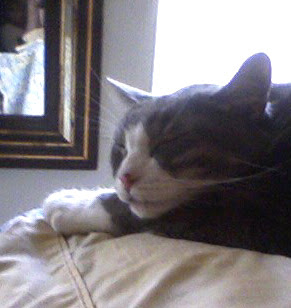 The session I just described was on Wednesday. Sunday I went again to work with Jinx. Jordyn had put a crate with a towel draped over it on her bed, so that Jinx can have some privacy when he wants it, as there are two dogs and another cat in the house. I had suggested after our last session that having the option of a closed space to go into may be a good idea.

Today he was actually laying on top of the crate. He likes to be up high so he can see everything. there were towels on top of the crate, so this was a cozy place for him to lie. He was very comfortable, as he had just been given a homeopathic remedy which seems to help him to be extremely relaxed. Today, I approached him gently, as it seemed that he may be receptive to hands-on Reiki from the start. I started out with my hands a short distance away, and after a bit we settled into a position that seemed to be very comfortable for him. My left hand was just barely touching his pelvis area and the other hand was either under or behind his head. I felt a lot of heat and strong energy particularly passing to his pelvis area. His head was very relaxed in my hand, and at times he put one of his front paws to rest on my arm. He seems to enjoy making a connection with me this way. He was very sleepy and stretched out on his side.
After a long while there, we shifted position and I had one hand again on his pelvis and the other just off to the side of his abdomen area. After a bit, it became clear that at this point he preferred me to have my hands a short distance away. Once I moved my hands just about 6 inches away, he really stretched out and closed his eyes, very cozy. This time, his tail was close to my right arm. Initially it was twitching a bit, but then he made a connection with me with his tail in the same way he has done with his paw, just resting it on my arm, and I could feel his energy coming to me through it.
At the end of the session, I thanked Reiki and thanked him, and he looked so peaceful. As often happens, Jordyn's other animals had gotten into a rather sleepy mode as well :)

Thanks to you all, and I look forward to seeing you soon!! xo

Posted by sarahsuricat at 4:13 PM