Staying in the Moment with Krishna: And Getting Ready for a Move 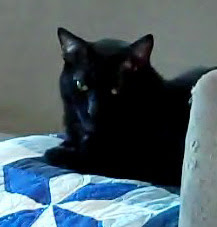 Krishna is a lovely cat who is very comfortable with his people, Rebecca and Tim, but extremely fearful of most other people. I have worked with him very slowly and gradually he has come to trust me more and more, though I still have to always give him time to warm up to me.

Rebecca asked me to come for a session with him, as they are getting ready to move to a new apartment. This is a change that can be stressful, especially for animals who are fearful. I made a bach flower remedy for Rebecca to give him, and made a spritzer bottle of Rescue remedy (10 drops of Rescue Remedy, the rest water) which she can spray in his carrier, and around in the new apartment, to help him feel more at ease there.

I was very happy to see Krishna, who I hadn't seen in a while. Rebecca said that he does seem to be less stressed now when people come over - and it makes a difference too that she has told them not to try to pet him, as he needs a lot of time to get accustomed to a person - it is a real accomplishment just to sit calmly in near proximity to him. Then the next step would be to gently touch him with a tool. Another approach would be to gently engage him in play with something like a flashlight, which doesn't require you be in very close proximity, but is another way to connect with him.

I tried a few TTouches using the paintbrush, but decided it would be most beneficial for this session to do Reiki with him to help him really relax. I started sending him energy from a couple of feet away, and got closer and closer. He grew sleepy quite soon, and went to lie down in one of his favorite cozy places, on a quilt on the couch (as pictured above), and he laid down and went to sleep. Animals will often nap while they are receiving a Reiki treatment, and this generally means they are really accepting and taking in the energy, which I truly felt today. Slowly I moved closer and closer to him, til my hands were just inches away. I felt waves of heat coming out of my hands, and felt him absorbing the energy, as though my hands were being pulled towards him.

This went on for a very long time. I was very close to complete contact, but still kept my hands just an inch or so away, afraid to startle him. I felt the energy going to several different chakras during this period of time, but especially to the heart chakra. I felt a lot of heat in that area, and felt something really let go in him. I saw him do a very deep sigh a couple of times, which is always such a pleasure to see animals do - like they are realllllly letting go.

All of a sudden Krishna woke up and was staring at me. I had wanted to get up so I was sitting on the couch so my face would not be so close to him but hadn't wanted to move too much as I didn't want to startle him. At any rate, I think he was surprised at how close I was to him. He told me that it was too much with a hiss and he sort of jumped at my arm, but didn't leave a mark of any kind. I really think it was just too much for the moment and he needed to tell me to give him some space.

I moved away for a bit, then very quietly sat on the couch a couple of feet away from him. Rebecca told me she often sits on the couch next to him to pet him, so this seemed like a good place for me to be. I slowly began to send energy to him again, trying to keep the stream of energy less intense than it had been. He began to get sleepy again, and rolled on his side. Sometimes he opened one eye and sometimes he closed both of them. I did a few TTouches on his forehead area with the paintbrush. As Rebecca noticed, he ALMOST really let go there when I did it, he seemed like he was just not quite ready to do that. I backed off and finished up the Reiki session.

I slowly moved away from him and as I spoke with Rebecca for a short while, I was happy to see that he was in a very relaxed mode, as though he could easily drift off into another nap.

Krishna teaches so much to me every time about how important it is to really listen to what the animal is ready to do, and to truly stay in the moment with him.

Sending you best wishes for a smooth move, and look forward to seeing you sometime soon in the new place!! xoxox

Posted by sarahsuricat at 5:43 PM