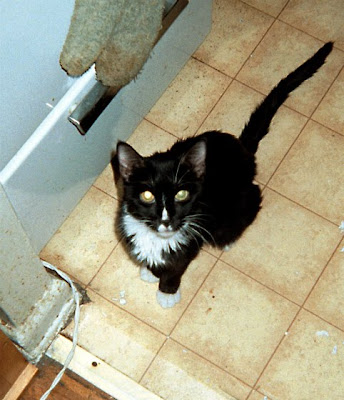 Doris (full name Doris Kiss Me Lips) was a sweet, gentle senior kitty whose guardian, Mari, adopted her at 10 years old and had her for 3 years. Doris had diabetes when Mari adopted her, then just recently was diagnosed with lymphosarcoma. Mari was giving her insulin, a very good diet and supplements and lots of love - doing all she could to help Doris to be comfortable in her last days. There are four other cats in the household who are so sweet and were very respectful to this gentle lady. I had the honor of doing Reiki treatments and TTouch with Doris over the past couple of months.

Doris was really a fighter - a very strong spirit inside a small, delicate body - but unfortunately she took a turn for the worse, so today I went with Mari to offer Reiki to her and say farewell. 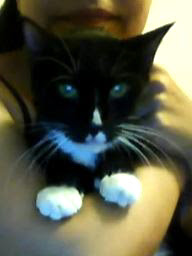 I met Mari at her apartment. Mari's other cats seemed to know that a change was about to happen. I did Reiki from a distance with Doris in the apartment for a short while, she did seem calmed by it. Then we took her in a carrier to the vet.

While we were in the cab, Mari was gently talking to Doris and petting her through the bars of the carrier, and I was sending Doris Reiki from outside the carrier. We continued this while we were in the waiting room, which, like most vet's waiting rooms, was pretty hectic with comings and goings and barks and meows. I kept visualizing a bubble of Reiki and light around us. Mari was petting Doris, talking softly to her, and doing some TTouches on her as well, while I continued sending Reiki energy to her, asking that she only take as much or little as she wanted to take. I expanded the Reiki flow to include Mari as well, as this is a very stressful situation, to say the least. Whether the animal has been sick for a long time or a short time, it is always so hard to say goodbye. As we did this, Doris stretched out and relaxed, stretching her front paw out to Mari.

Once Doris was on the vet table, Mari spoke to her softly, petted and TTouched her, looking right into her soulful eyes. I also did some TTouches, continuing the Reiki flow. This all seemed to be very soothing to her, and she stretched out. It felt like the energy was smoothing out. We continued as the injections were administered, and Doris went to sleep, then began to transition. She seemed so peaceful. I told her (silently, in my mind) several times during this process how loved she was. We both spoke softly to her and kissed her as she passed away.

Even after Doris had passed, as we stayed there for a few minutes longer, I felt I needed to continue the energy flow for a bit, as though somehow the energy was going with her as she transitioned. It still felt like the energy was pulling out of my hands towards her body. I know this is tough territory to talk about, and no one really knows what happens afterward, so I am just trying to put into words what I was feeling.

Mari, thanks so much for giving Doris so much love and care, such a loving home, and such a wonderful life with you. I send so much sympathy to you. Hugs go out too to the rest of your cats, who will be experiencing this transition as well. And Doris, you really touched my heart. I will always remember your elegant, gentle, sweet spirit. Love and thanks to you all....

Posted by sarahsuricat at 4:57 PM