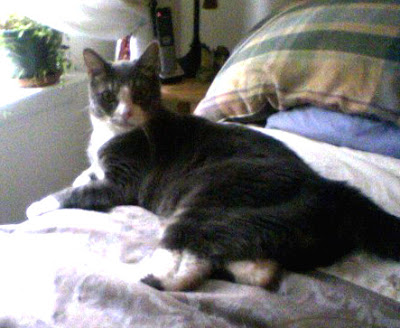 I went to do Reiki with my friend Jordyn Thiessen's (http://dancingminddesign.com) cat Jinx today - last night was when Hurricane Irene came through, definitely not with as much force as was expected, that's for sure! but storms can have an effect on the animals, big or small. Jinx has been having mobility problems - his back legs don't seem to have much sensation in them, so he can't use them quite properly (either a disk problem or tumor).

Jinx actually seemed to be in relaxed condition when I got there, he was resting in a crate that he enjoys. I sat outside the crate and began to offer him Reiki from a short distance away, maybe 6-8 inches. Initially, the front part of his body was nearest my hands, but he soon shifted his position so that my hands were sending the energy to his back legs and lower back, which is something he has done before. Sometimes animals prefer to have you send the energy to a part of the body other than the one having the most trouble, as it can be too sensitive there, but Jinx regularly has usually shown me by shifting his position that he wants me to send the energy right there. He really stretched out and relaxed, taking a little Reiki nap.
One of Jordyn's dogs, Petey, who can often be very active and "in your face" for attention, calmly fell asleep right behind me as I did this :)

After a time, he shifted again, so that one hand was sending energy towards his abdomen and the other, more towards his head and towards where the heart chakra is on the front part of the body. His eyes relaxed and he got very cozy there for a time.

He shifted position a couple of more times, and I had thought he was done but then for a few minutes I felt more energy coming out of my hands towards his heart chakra again, so I stayed there briefly and his eyes relaxed.
After we were done, he got up and walked slowly towards the apartment door. One of the activities he really enjoys is walking out in the hallway, and I was happy to see that he wanted to do this, - that even though he walks rather gingerly, he still is motivated to do the things he enjoys.
Posted by sarahsuricat at 2:56 PM