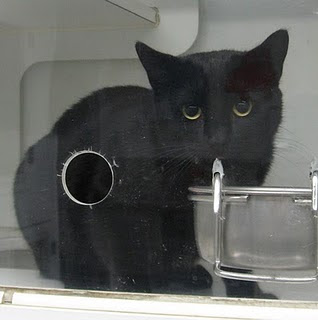 Today when I worked on the Mayor’s Alliance cats thru Tavi and Friends TTouch-in-rescue program, I decided to try a new tool with shy kitty Serena. As she has been extremely responsive to the long-handled paintbrush, I decided to try something with a shorter handle, so I brought a soft hairbrush with me. I started out by doing circles and strokes with the paintbrush (using the tip of the brush, the side of the brush, and even the side of the handle of the brush), and, as usual, she started purring, rubbing herself against the brush, against her cage, and walking toward me. I tried the soft brush as well, and she responded to that well also, pushing her body into the brush, and even at times pushing her body into my hand, so I was able to get in some circular TTouches on her body using my hand as well. It really is a pleasure to see her feeling more comfortable. 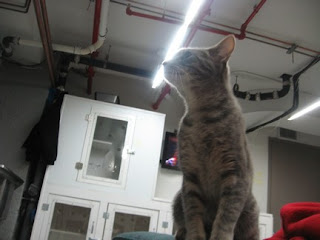 Charles is a young little tabby who always can’t wait to come out of his cage for contact, he’s always purring away, rubbing himself against me. On him I did connected clouded leopard TTouches going down his body and then a few very small circles with the tail when my hand reached the end of his body. I will have to get a video up of the tail circles, as it is important to stress that the movement is very small, and I am either barely holding his tail or making a circle with my index finger and thumb around the tail, gently moving the tail in a circle and a quarter, pausing, then doing a circle and a quarter. 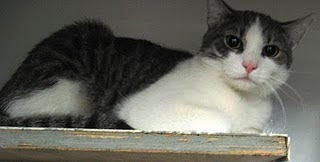 Pattie still seems traumatized and will flinch if you try to touch him, so I simply offered Reiki to him from a short distance away. As I did this, he became very comfortable, laying on his back and coming to the front of the cage after a while. I tried a couple of times to see if he would be more comfortable being touched after receiving Reiki, but he still was frightened, so, as the TTouch saying goes, “Meet them where they are”. You have to always remain in the moment and be sensitive to what the animal is ready for. 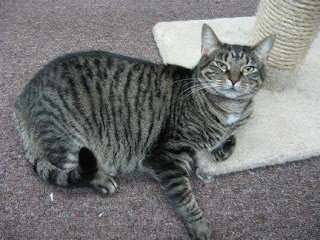 Brie was actually more friendly and seeking of attention than usual. Most often, when I open her cage, she is more interested in running around, playing with the scratching post and toys rather than being touched, and she can often get over-stimulated easily. But today she came towards me, so I did some clouded leopard and chimp TTouches along the sides of her back, and also tried a few tail circles with her. I kept the session short, not wanting to push the issue with her too much. 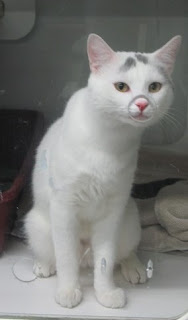 Johnny is a totally love and wanted to be held a bit, so I did some TTouches on him while holding him, then let him onto the floor, where I sat with him and did some more TTouches – abalone, clouded leopard TTouches and then ear slides. Some cats do not like to have their ears touched but he is very comfortable with this. 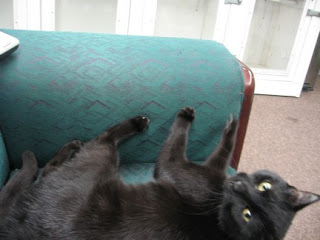 Max II is SO much more comfortable this week, and surprised me by putting his face directly in my face, rubbing his head against my face. He also wanted to be held, so I sat on the couch with him in my lap and did TTouches with him there. He went from being a bit reticent last week to being literally right in my face this week, and so full of love to give. 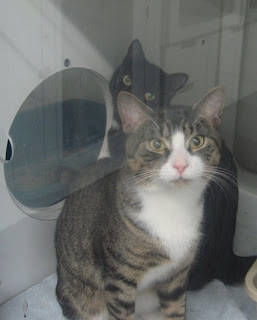 Above: Max II with Jack 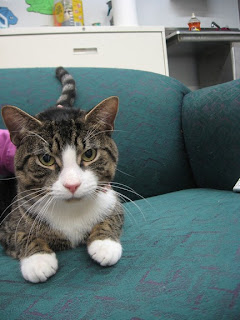 As for Jack and Andy (not sure which is which, but for now I'll call the smaller one Andy), Jack (above) again was more friendly than Andy, and this time he wasn’t hesitant at all, really responded to abalone touches and Tarantula pulling the Plough – he laid right on his side and his back, very at ease. Andy (below) is still shy but gentle and sweet. I went very slowly with him and did touches and strokes using the back of my hand. 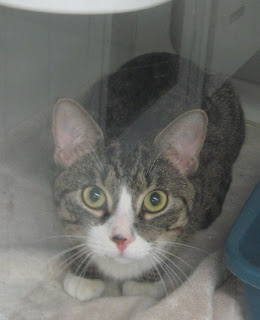 I look forward to working with these kitties more in the new year!
Posted by sarahsuricat at 11:11 PM