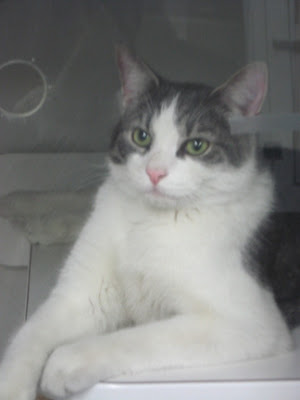 When I went to do TTouch on the Mayor's Alliance cats through Tavi & Friends' TTouch-in-Rescue program, a bunch of the cats had been adopted or fostered, so there was only a small group left that particular day. That gave me plenty of time for individual attention, which was great. I spent a LOT of time with Pattie, who has little by little been coming out of his shell. I had a great session with him today. This blog post will be dedicated to him, then I will discuss the other cats in a separate post.

As I was able to let the cats out of the cages once again, I did so with Pattie, and he came bounding out. He seemed very eager for contact. He had been watching me as I had been working with the others, sitting in the front of the cage, pressing his paw up against the window of the cage as though he was reaching out to me.

As he has been more comfortable with TTouch from a distance, I continued contact with him in this way (with a long-handled paintbrush), and let him come to me for more direct contact. We began to play a little game where he was weaving in and out between my legs, rubbing up against me, and I began to do circular TTouches on his body as he did this. He responded well to this and began pushing himself into the brush. He also would occasionally play with the paintbrush, so I kept a second paintbrush handy so that if he did this, I could touch him with the other brush. Please click on this youtube video which will show what I did with him. By the end, I was able to touch him on his head and his body with the brush.

Occasionally he would settle a bit and at that point I would do some abalone TTouches and chimp touches on his body, as well as Noah's march (straight strokes down the body). I only did a little at a time with the direct touch, so as not to overwhelm him. He seemed to be both focused and calm when I put him back in his cage. Go Pattie! It is great to see him feeling so much more confident and comfortable.
Posted by sarahsuricat at 9:57 AM