When I went to work with the Mayor's Alliance cats through Tavi & Friends' TTouch-in-Rescue program today, the cats still needed to stay in their cages. I did hands-on work with a few of the cats who I knew I could keep in their cages, and I offered Reiki outside of the cages to all of the cats after that.

Johnny (below) is an extremely sociable cat, and was right at the front of his cage, asking for attention. I worked on him in his cage for a short time, doing slow abalone TTouches and llama TTouches, which both use the whole hand and are very comforting. I also picked him up and held him for a bit. Then I returned him to his cage. 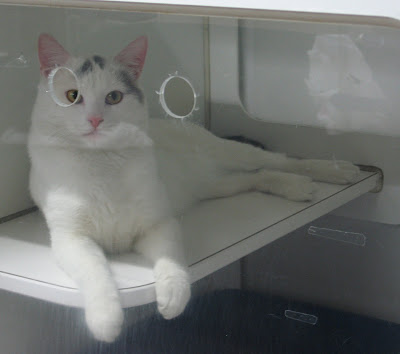 Next, I worked with Jack, Andy, and Max II (the cats in the three pix below), who are all in the same cage. I opened the cage just a little bit, so as to not let them out, and would do little circular TTouches on whoever came near me. They were very excited to have contact, so I used touches with the back of my hand (which are less stimulating) like the llama TTouch and the chimp TTouch, as well as TTouches using my whole hand, like the llama and abalone TTouch, as these are generally more calming than stimulating. All three were more relaxed afterwards, and began to groom themselves.

Above: Jack, Below: Andy 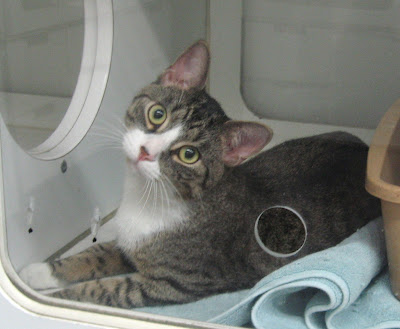 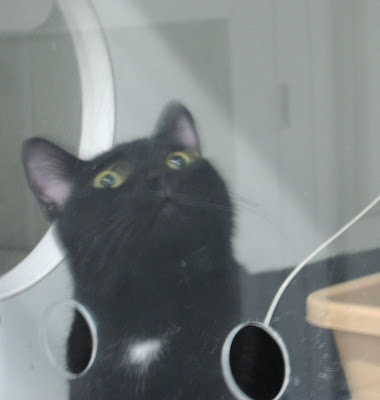 Pattie (below), who started out VERY shy a few weeks back, has been getting more and more comfortable. He still can tend to swat if you approach her directly with your hand, but it seems that he is craving touch, as he always comes to the front of his cage to watch when I am working on the other cats (see photo below), and when I open the cage and simply talk to him, he approaches me and/or starts rolling on his back or stretching out on his back, stretching his paw to me. I did some circular TTouches on him using a paintbrush, as he still seems to be more comfortable with a little distance in between me and him. 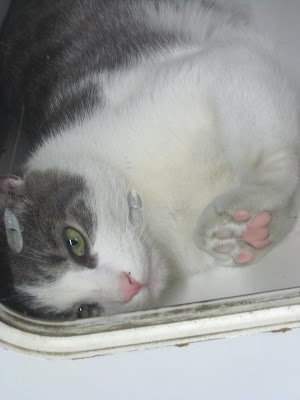 Brie always comes bounding out of her cage when I open it, so I only worked on her from outside the cage, sending Reiki. It took a while for her to settle, but once I moved further away from her to send the Reiki, she was more calmed by that position, and settled eventually into a sleepy mode. 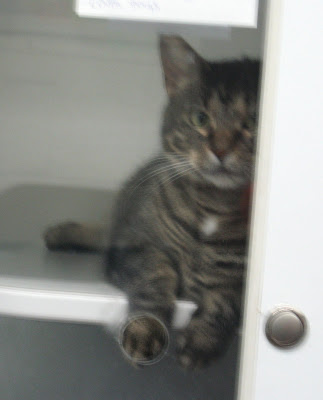 At the end of the session, I stood in the middle of the room to send Reiki energy to all the cats, imagining Reiki coming out of my whole body. I felt my hands pulsing very strongly, and also began to feel light and energy coming from my whole body. I very calm feeling spread throughout the room, and by the end, all the cats were either napping, stretched out, or grooming themselves.
Posted by sarahsuricat at 6:00 PM