Today I went to work with Bonsai and Nilo, two lovely cats who I have been working with for a few months. Bonsai is a sweet senior Burmese kitty who has had seizures from time to time, and Nilo is a young Bengal with a lot of wild in him.

Bonsai had had a short seizure the day before, so I wanted to do some very gentle work with him, and with Nilo, I am little by little getting him used to being touched by a person other than his human "mom".

Bonsai has a very gentle energy and is extremely sensitive, so it took a little bit to get him to feel comfortable enough to really settle in. So I started out by doing a little TTouch with Bonsai, then a little TTouch with Nilo, alternating back and forth, until Bonsai got to a place where he was very cozy and it felt like he was very ready to receive Reiki. He got onto the cat tree where you see him in the picture below. I began to send him some very gentle Reiki energy from about six inches away, and could see his eyes start to close. I moved my hands a little closer and he adjusted his body til my hands were where he wanted them, just about an inch or two from his body, and near his lower back. Often the animals will show you the part of the body where they would like you to send the energy. I stayed in this position with him for a very long time, feeling a lot of waves of energy and heat. After it felt like the energy was becoming more stabilized, I slowly began to move my hands a bit lower on his back, and I felt quite a bit of heat there, so I stayed there for a while. During the session I slowly moved to several locations on his lower back, then later I focused around his throat chakra and crown chakra, where I was feeling quite a bit of heat and energy. He really settled in during the session, closing his eyes and purring. He looked as though he was being very comforted, and I could feel him absorbing the energy. 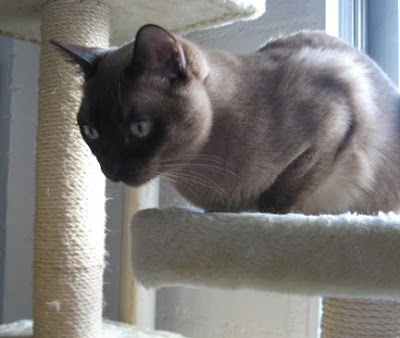 When he had enough, he got up and walked away, which happened just as I was wondering if this had been enough for him. He did seem more focused and energized afterwards. 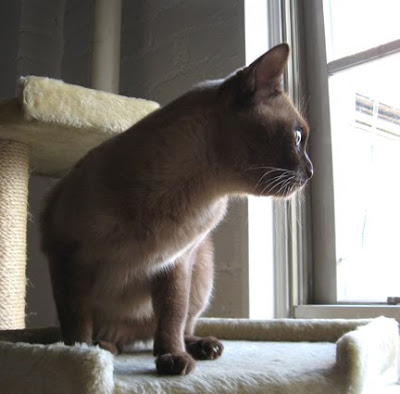 Next I went to work with Nilo. Last time I worked with the cats, Nilo began to respond to circular touches using the wand with an Ace bandage at the end, so that is how I started with him at the beginning of the session, when I was alternating between Nilo and Bonsai. He was pretty receptive to this, rubbing his body against the wand a bit and against nearby furniture, but was only ok with it for a few seconds, then he wanted to move on.

After I worked with Bonsai, Nilo was on his bed which is in a bit of a hidden place behind the couch, as you see him below. This seems to be one of his "safe places". I used my long-handled paintbrush and began to do some circular TTouches on his head, and a few strokes down his body. He really started to settle into this and become more at ease, leaning a bit into the brush. I worked my hand down the brush and began to do chimp TTouches and raccoon TTouches sometimes with the front and sometimes with the back of my finger on his head, around his forehead and around the base of his ears. He responded to that as well, looking very cozy. I did a few strokes down his back as well. I gave him a break, then did this again with him in that location. When he had enough, he got up and moved to a different place. I spoke to his owner for a bit and then he got himself in another one of his safe places, a box-like structure with a hole in it on the cat tree. I was able to do raccoon TTouches with my hand on him in that space as well. It was interesting to see that with both Bonsai and Nilo, I was able to pick up where I had left off with them about a month ago, instead of starting from scratch with them again. With Bonsai I had a longer, more focused Reiki session than I had ever had with him, and with Nilo, I had more direct contact than I had been able to have previously.

Thanks boys! You always teach me so much. I am constantly reminded of how important it is to be patient and truly stay in the moment with animals. This requires a similar type of thinking to that which happens when I am creating art, where you are thinking creatively and trying new approaches as you move along, not being attached to the way you think things should go, but exploring and keeping your eyes always open to new possibilities and ways to approach things. 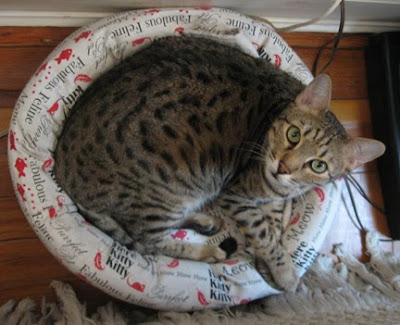 Posted by sarahsuricat at 4:06 PM