TTouch with the Mayor's Alliance Cats Jan. 31 and Feb. 7

Following is a blog post about my work with Mayor's Alliance Rescue cats through Tavi & Friends' TTouch-in-Rescue program. I have combined the two dates above. 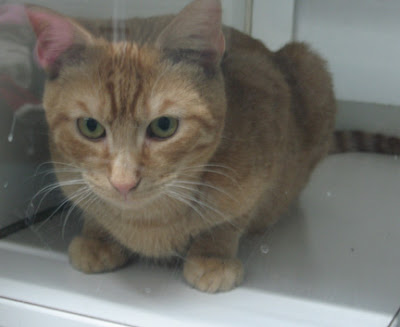 Tango is a very friendly young kitty, who has some issues with his hind legs. He can actually get around fine, even running and jumping. But he sort of swings around his hind legs rather than bending them and using them in the way cats usually do. I have been doing TTouches with him to try to bring awareness to his hindquarters and feet, as well as connecting TTouches to connect front to back. I have been doing connected Raccoon TTouches going all the way down his back and down his legs as well, and on his feet and in between his toes. Fortunately, he is a friendly cat and it is not hard to do this. I have also been doing zigzag TTouches going down his back and across his back, even zigzagging to connect down his legs. I tried to use a wrap with him but he is not keen on it, so I decided that the touches would be most beneficial to him at this time. He is energetic and can get squiggly after a short time, so I work on him in short bursts -- a little TTouch, let him go run around, then try again. He often will go back into his cage on his own, so sometimes I work on him in his cage too. 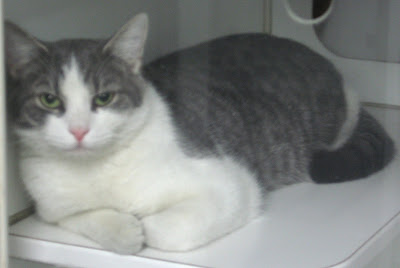 Pattie (above) looks a bit serious in this photo, but he has really come around the past few weeks. He has been through a few transitions while at the boarding facility - when he first came in, he seemed shy but receptive to touch, then for a few weeks it seemed as though something had scared him and he would often try to swat if you approached him (though at the same time he seemed to crave touch and would come to the front of his cage for attention). Now he is very seeking of touch, and I was even able to pick him up with no reaction from him at all. When I take him out of the cage, he weaves around my feet. I have been alternating between TTouching him with a paintbrush, which he really responds to, and doing touches mostly with the back of my hand or my whole hand. He just altogether seems like a much happier, playful cat, which is amazing to see. Often when he is in his cage, he will rest a paw on the plexiglass window, reaching out to me. 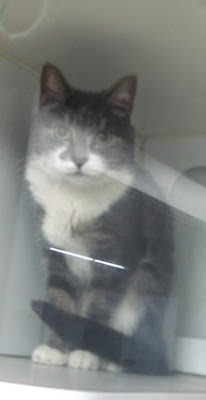 Nene (above) arrived recently with her buddy Mack (below). Nene starts out a little shy, but with some encouragement, she will come forward and is very friendly. I used a paintbrush to make initial contact with both her and Mack, but quickly transitioned to using my hand to do the TTouches, as they both were very receptive. Please click on the following link and you will see a youtube click showing a bit of my first day working with them, and I transition from using the brush to using the back of my hand to do some llama TTouches

Mack was very comfortable with being touched directly with my hand, but because the cage was on an upper level and he was on a shelf, he was hard to reach! You can see by some of his body language in the video (blinking, licking) that he is pretty cozy with the brush TTouches.
I know he looks a little quizzical in the still photo below but I think he is just wondering what I'm up to!
On Feb. 7, I started out with Nene using the brush, and she quickly came to the front of the cage, rubbing her head against my hand, so I then did TTouches on her mouth area and down her body, and she was very comfortable with this. She is still startled by sudden noises or someone coming in the room, but her recovery is very fast. Mack is comfortable right away with being touched by hand, though he also can be startled when someone new comes in the room. They are both very gentle, sweet cats. 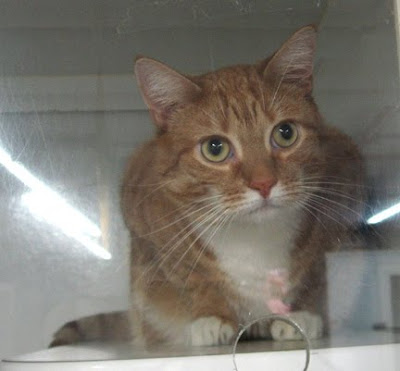 Below is Kobie, who arrived very recently. When I opened his cage, he jumped out and ran inside of a carrier which was on the floor. I gently did some circles on him using the back of the hand on a plastic back scratcher, starting on his head. At first he started to pull away, but once he felt the circular TTouches, he stopped and it looked as though he thought, "wait a minute, this feels different. hm, it feels good!" and he started to settle into the touches and lean into the back scratcher.
This is something I have observed a lot with TTouch. As the TTouches are non-habitual movements, quite often, I will see an animal change their mind midstream and go from starting to pull away to calming down and actually leaning into the touches. The touches seem to interrupt THEIR habitual response, and they seem to think, "hey, wait, this feels good, I'm going to check this out." It is so interesting to observe this time and time again, and so great to see these animals, who are used to being frightened and pulling away, begin to be able to have a different response.
Back to Kobie. Soon he came out of the carrier and I was able to do some TTouches on him there. I gave him a break, and he soon went back into his cage. Once he did this, I did some more TTouches on him using the back scratcher again, some on the head, and some going down the body. He became more and more relaxed as I did this. I did touch him a bit with my hands as well, but I didn't want to push the issue, as this was our first session together. 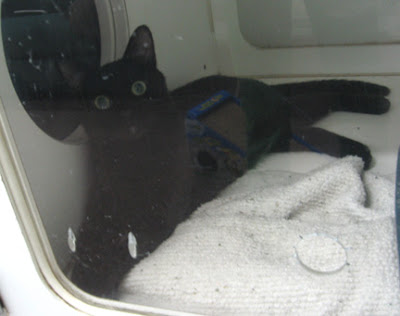 Also, on Jan. 31, there was a very friendly black kitten named Mittens. I did clouded leopard TTouches, abalone TTouches, mouth TTouches, and ear slides on her. She was very soothed by this and stretched out as I did this. On this date there was also a polydactyl polka-dotted cat who we temporarily named Polly, and she was also super-friendly. She was very active, so I used TTouches (llama and abalone) using my whole hand to calm her energy. I also did some ear slides on her. Both these cats had either been adopted or been fostered when I arrived on Feb. 7.
Brie (below) is a sweet, very playful cat, who can get over-stimulated, so this time I decided to completely wait for her to come to me once I let her out of the cage. This worked quite well. When she was ready to come to me, I did some llama TTouches down her back, and she rubbed against me, looking very comfortable. 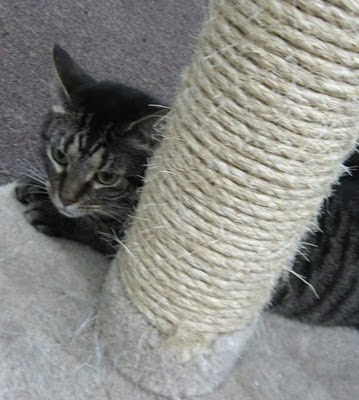 Posted by sarahsuricat at 3:59 PM