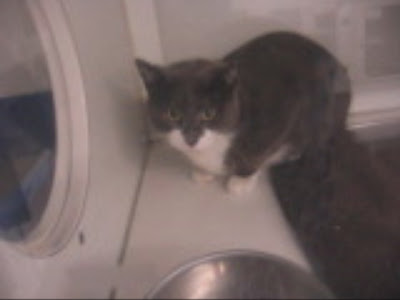 Louie is a lovely grey and white cat who had recently arrived when I went to work with the Mayor's Alliance rescue cats thru Tavi & Friends on Valentine's Day. He looked as though he was not aggressive, just scared, as you can see by his look of hesitation above.
With a new cat that I am not 110% sure about, I generally start off using one of the TTouch tools to make contact, to put a little distance in between the cat and me, so that we both feel safe. Louie was in a double-cage with a hole in between the two, so I put plastic the back scratcher through the hole between cages from the cage he was not occupying. I stood sideways to his cage (something I always do), and spoke to him softly as I gradually made contact with the back of the hand of the back scratcher. I softly touched him a couple of places on his his body and head, to see where he was most comfortable being touched. He was most responsive to being touched on the top of his head and along the ears, so I stayed there and he began to push into the back stratcher with the top of his head. 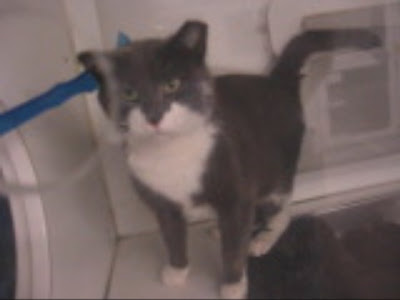 I continued, doing some circles and strokes on his head, including the sides of his face as well and gradually working in circles and strokes on his body as well. Little by little he began walking towards me til he was right near the edge of the cage near the door. He made a few little mewing sounds, as though he wasn't quite sure, but was kind of excited to be making contact at the same time.

During this process, I would give him a break from time to time, taking the back scratcher out of the cage, letting him rest for a minute, then starting again. It is really important to give breaks along the way when you're working like this, especially when you're working with an animal that is shy or unsure. Sometimes when I gave him a break, he would return to the back of the cage, but then would move toward the front of the cage again once I started to touch him.
You can see the full clip of me working with him at this youtube link:
http://www.youtube.com/watch?v=2CXIgFUibj4
Sometimes I think he surprised himself when he ended up so close to my hand! I think he would have been OK with me doing TTouch on him with my hand, but I decided not to push the issue, as this was my first time working with him.
Thank you, Louie, I look forward to working with you more soon. 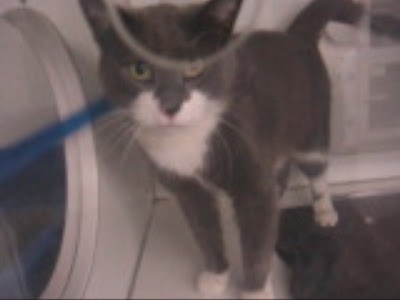 Posted by sarahsuricat at 1:09 PM