Sorry this post took a while to publish, but better late than never!
Of course I was delighted to give some love to the Mayor's Alliance cats on Valentine's day :)
When I arrived, there were a few new cats, so I worked with them first.
Clint is a lovely big orange cat, and he was friendly right away. He was pretty excited to have contact, so I primarily did Ttouches which use the back of my hand, for a less-stimulating, more calming effect. I did llama TTouches and chimp TTouches going down his back, and then Noah's march (a straight stroke down his back) after that. Sometimes I would do a circle with the back of my hand and then a slide going all the way down his back. I also did a bit of ear TTouch with him. 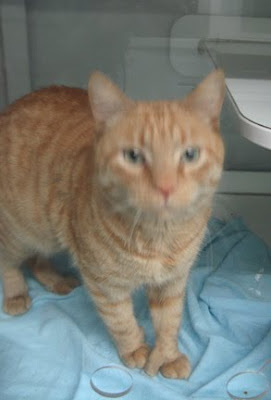 Next, I worked with Louie, who I discuss in detail in a separate post. 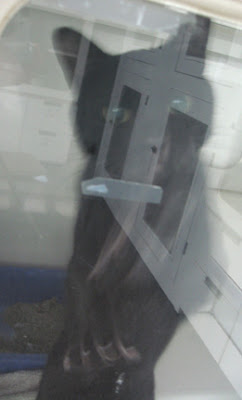 Kobie is the young kitty pictured above who I started to work with last time. As you can see in the photo, he is pawing to get out of the cage, which was quite different behavior than the previous week, when he was more in the cowering position in his cage.
Once I let him out of the cage, I squatted on the floor so I was down at his level and he could easily come to me. He started to rub himself against me on one side of me, then the other side. As he did this, I did clouded leopard TTouches going down his back, ending with doing a stroke and gentle circle with his tail. Please keep in mind that I was not holding onto the tail. As the tail slid through my hands (he kept walking), I gently moved my hand in a small, clockwise circle, probably only going around once. As I did this, his energy went from feeling slightly overstimulated to feeling more focused. I also did abalone TTouches on him, as well as raccoon TTouches on his head and strokes on his ears. He was quite comfortable being touched in this way - letting him continue moving as he wanted to, doing TTouches on him as he walked and rubbed himself against me. It was interesting, when he was done, he just hopped back in his cage. 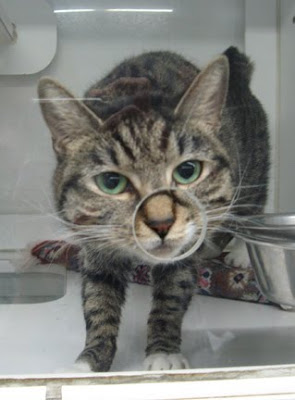 The new little tabby's name is Laura. She was very energetic and eager to be touched, very friendly. I did chimp TTouches going down her body, and little raccoon TTouches on her head. She was purring like crazy and very comfortable the whole time. 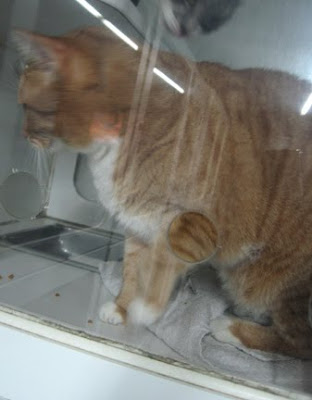 I realized when I went there that I have Nene and Mack's names mixed up, as the orange kitty looks like a Mack and the tabby looks like Nene, but it's really the other way around, sorry kitties! I assume they are both boys but I will have to check on that. Nene (above) and Mack (below) are in the same cage. Mack had started out a little shy last week, as they both were new, but both these cats were very comfortable this week. On Nene, I did chimp TTouches and some Noah's marches down his back. Mack came right out of the cage, and as he walked back and forth, rubbing his face and body against my hand, I did clouded leopard TTouches on his body. I also used the jelly scrubber with him. This is a tool originally used for grooming horses, but it is a wonderful TTouch tool. You can lightly do circular TTouches on an animal, using either side of the scrubber, depending on what your animal prefers. Mack was very comfortable with this. 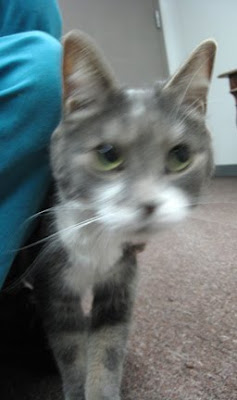 Pattie (below) was next. He has come such a long way. He was frightened for quite a while, and now can't wait to come out of his cage. He will stay right in the front of his cage with his paw pushed against the plexiglass until I come to work with him.
What his favorite thing to do is to wind around a person's legs, rubbing against them and being generally playful. I use a long-handled paintbrush to do TTouches on him while he is doing this. Sometimes I will have two paintbrushes handy, so if he starts to play with one of the brushes, I can still do TTouch on him with the other. 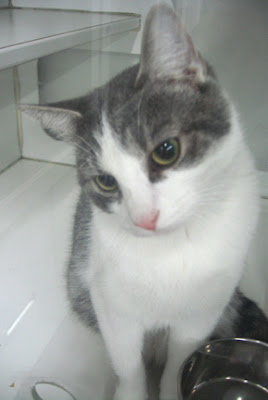 Next I worked with Tango, he appears to be walking a little better this week, using his hind legs a little more completely. I did zigzag TTouches on him while he was walking, as he was in a very active mood. I did zigzags on one side, then the other, then criscrossing from one side to the other, ending with doing little circular TTouches on his back feet. I did a little ear TTouch on him as well. 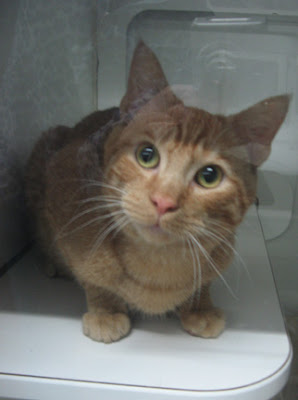 Brie can get overstimulated easily, so I take it slow and easy with her, just doing a few circular TTouches on her at a time, using a back scratcher to do this at first (with the back of the hand of the back scratcher, then a bit with my hand. 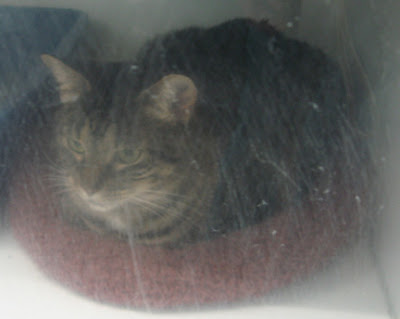 happy valentines to all you little ones!
Posted by sarahsuricat at 1:11 PM