TTouch and Reiki with Mayor's Alliance Cats: Jan. 3 and Jan. 10

When I went to work with the Mayor's Alliance cats Jan 3 and 10 through Tavi & Friends' TTouch-in-Rescue program, I was told not to let the cats out of their cages, as some of them were on medication, etc and they didn't want to risk spreading germs.
Most of these cats are used to coming out into the middle of the room when I open their cages, so this was a bit of a challenge. 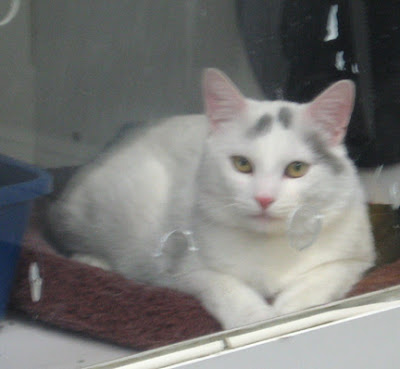 Johnny is a super-friendly, sweet cat and loves to have attention. I tried working with him, keeping him inside of his cage, doing slower, more comforting TTouches like the abalone TTouch, which uses the whole hand. He was frustrated that he couldn't come out of his cage though, so I decided after a bit to close his cage and offer him Reiki from outside his cage, standing a couple of feet away. 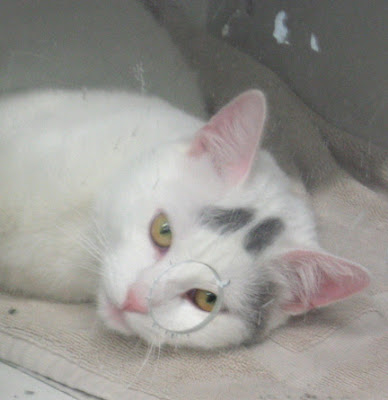 I felt Reiki pouring out of my hands, and within a short amount of time, Johnny became quite relaxed, and started doing the relaxed, goofy poses which you see in these pictures. He looked so comfortable! I did the same thing with him on Jan. 10 as well, first working on him in his cage for a brief bit, then offering Reiki outside of the cage.

Pattie (below) is still acting shy, and didn't try to come out of his cage on Jan 3, so I offerened him Reiki from about a foot away with his cage open, speaking to him in a soft voice. He stretched out toward me and was looking right at me, so I was sensing that he was craving contact, just wary of it. 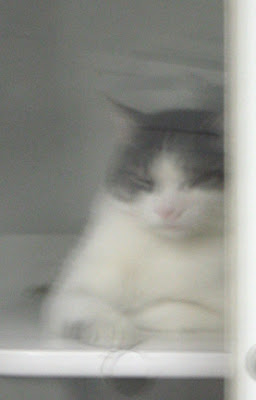 It is interesting that he looks right at me when I am working with other cats in the room, as though he is craving contact, and picking up on energy I am sending to the other cats as well. After sending Reiki to Pattie with the cage open, later on I sent Reiki to him outside of the cage, and he got quite sleepy and relaxed.
On Jan. 10, I tried working with him a bit using two long feathers. If he played with one feather, I did a few circles and strokes on him with the other. He was mostly interested in playing, but that was good in itself, to have him comfortable engaging with me in that way. After I did this, then I offered him Reiki, which made him very relaxed, and he stretched out and closed his eyes. 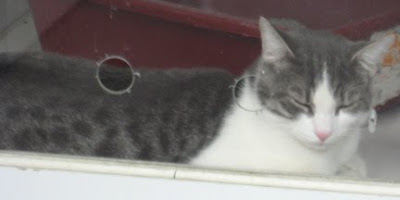 Max (below) is a playful little guy, so I decided to only work with him outside of the cage, sending him Reiki from there. These cats sense the energy so quickly, and I could sense his relaxation, plus the growing trend of relaxation in the room as I sent him Reiki, as the other cats in the room were picking up on the energy. On Jan. 10, he was no longer there as he had been fostered or adopted. 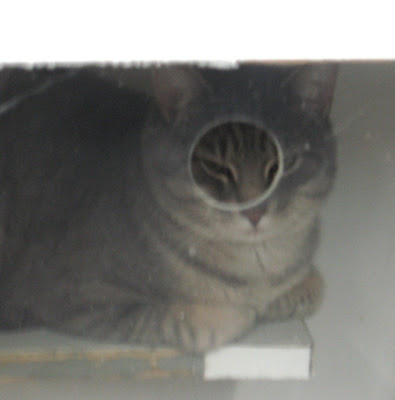 Andy, Jack and Max II - two tabby and white cats and a black cat, pictured in the several pix below, are in the same cage, near max, and they began to pick up on the Reiki energy as well. I moved closer to where their cages were and sent them Reiki as well. All three of them are quite playful and love to come out of the cage for contact, so it took a while for their energy to calm, 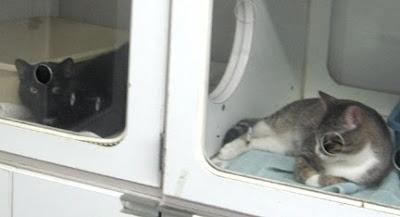 but after a bit you could see that their energy was slowing down, and they began to groom themselves and stretch out. Jan. 10, I did the same thing with them, with the same result. 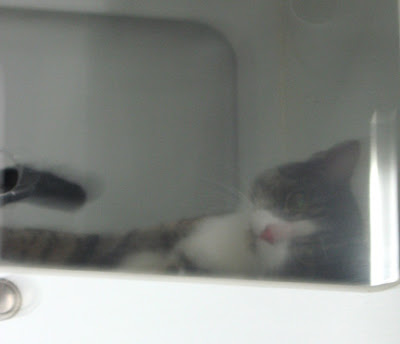 Both days ended up with them looking quite cozy indeed. 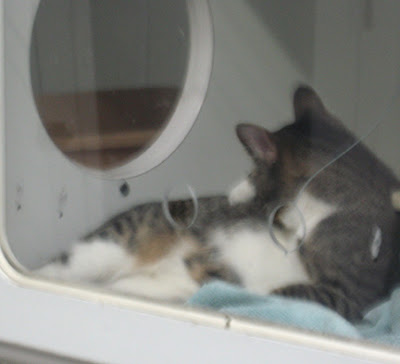 Even Brie (pictured below), who loves to play and waits at the front of her cage, as pictured below, began to respond to Reiki after a while. I told her, as well as the other cats, that I was sorry I couldn't let them out today, and they did seem to understand. I stayed further away from Brie than from the other cats, as I thought if I got too near to her cage, she would expect that I was going to open it up to let her out, so I didn't want to lead her on. It was the same story with Charles, who is a very affectionate cat (sorry I didn't get a pic of him). At first he was pawing at his page to get out but by the end of my session with the cats, he had settled down along with the rest of them. I did the same thing with Brie and Charles on both of these days.

I ended up the session on both days pretty much in the middle of the room, feeling Reiki energy coming out of my whole body, sending it to all of the cats, sending light and healing energy to them. 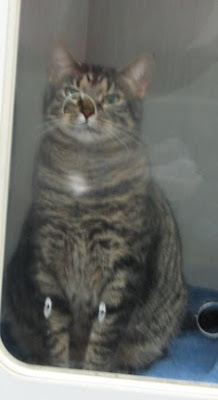 Posted by sarahsuricat at 2:26 PM