TTouch and Reiki at BARC Shelter: Update on Animal 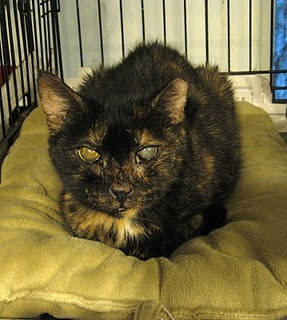 Animal is a very petite tortie kitty at BARC Shelter. She arrived at the shelter a few months ago after her owner passed away. She has had ongoing digestive issues, and has been receiving medication and a special diet for that as well as other health issues. She is also blind in one eye, and quite a shy girl. I think the blindness makes her more fearful, and it seems to be scary when she sees a hand come towards her. For a long time, due to the shyness and probably also due to not feeling so well, one would often see her in the back of the cage and in a rather hunched up position.

I have been working very intensively with her since she arrived at BARC, using both TTouch and Reiki, so I have been able to observe emotional as well as physical changes as they have happened along the way. I have also quite often sent her distant healing. I am so happy to say that recently she appears to feel so much better physically and emotionally. The medication and diet has been helping her to feel better, which took a while, but she recently seems to be really turning the corner, which is such a pleasure to see.

I have done a lot of Reiki work with her, helping to balance her chakras (energy centers). Until recently, I mostly found heat around the areas dealing with digestion, so I would mostly concentrate there. The past few times, though, the heat shifted to her throat and crown area, so I have been focusing my work there. The throat chakra has to do with expression, the crown chakra has to do with our spiritual nature and connection to the universe. These areas can be hard for a shy cat to tolerate someone's hands, but as I placed my hands near these chakras, slightly away from the body, she settled right in and began to stretch her body out, stretching her paw out towards me as well. This was a very new body posture for her.

The first day I did this, shortly after my session with her, I was working with a cat across the room from her and suddenly I heard a little meow and cat-chirpy sound (that brring! sound that cats can make). I looked around, and discovered it was coming from Animal. This was the first time I ever heard her utter a sound. I looked at her to make sure she was not in distress, and she looked at me as though she was fine, she was just surprised at herself. This same thing has happened the two days following that when I have focused on these chakras. It is very interesting to see. In general, she appears to be coming out of her closed-up state. When I do TTouch on her, she more quickly becomes relaxed and begins to rub her head against the bars of the cage and against my hand. She is also hanging out in the front of the cage more often. Though she is still afraid of a hand suddenly coming towards her, once she realizes it is a gentle, friendly person who is touching her, she quickly becomes responsive.

I especially noticed heat from the crown chakra yesterday when I was working with her, so I stayed there for a while. This feels like it makes so much sense, that she is ready to connect more fully with the universe. Thank you to all the BARC staff and volunteers for all the extra help and love they have given to this cat, and I hope for her to have a connection with the perfect person or people who will give this special being a forever home when the moment is right. Much love to you, Animal!
Posted by sarahsuricat at 1:48 PM