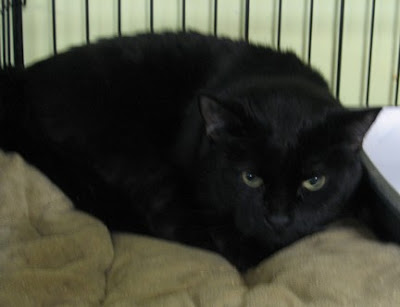 Boychick is a big, gorgeous kitty who arrived recently at BARC shelter in Brooklyn, after his owner had to go into hospice. He is frightened to be in the shelter but gentle and not aggressive. He stays in the back of his cage for the most part and often seems very pulled in.

I have worked with him several times, doing mostly Reiki, as I feel he really is soaking in the energy. I have been doing TTouch with him as well to help his circulation and his connection to his body.

I have felt quite a lot of heat coming from the area of his heart chakra, which makes a lot of sense, so I have focused a lot of attention there. It has felt like my hand is pulled there like a magnet. He does seem calmed by the warm energy. I have also felt my hands gravitate to his back end, or his root chakra. This energy center is important for grounding, so that makes a lot of sense as well. Sometimes with a frightened cat, it is better to keep your hands a distance away, as the energy is too strong for them to handle in an ultra-sensitive state, but Boychik appears to be very comforted by having my hands directly in contact with him. It is so sweet to see him settle into a cozy nap after working with him.

This past Saturday I felt the strongest connection yet with him. I alternated between sending healing energy to his chakras and doing TTouch. This time, in addition to working with the heart chakra, I also spent a lot of time sending energy to the root chakra, which is the area near the base of the spine, and has a lot to do with feeling grounded and feeling safe in the world. This seemed to make a real difference with him. When I was finishing working with him, he opened his eyes and sat straight up in his cage - which was different for him because usually he is lying down at the back of his cage, keeping his head down. He seemed as though he had woken up from a long nap. His eyes were wide-open, alert but not frightened-alert, just focused and open. This was great to see. Later, when other people were petting him, he seemed more responsive than I have seen before. I need to get a new picture of him to put up, the one at the top of this post is a "before" picture :)

Thank you, sweet boy, so glad to see you feeling more comfortable.
Posted by sarahsuricat at 10:43 AM