When I went to see the Mayor’s Alliance cats today, I saw that Cheeks had either been adopted or fostered, and there were several new cats. 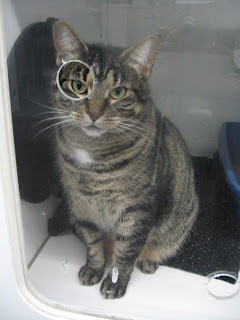 Above is Bree, who has been there for a while. She s a very playful cat, so I generally will just do a few TTouches at a time with her, as she can get over-stimulated pretty quickly. I tend to use the back of my hand to do the TTouches with her, as this is a less-stimulating way to touch her. I think part of this too is that when I let her out of her cage, she is often more interested in letting off steam than being TTouched :) 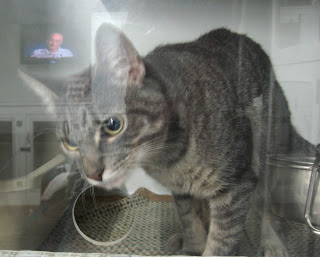 Charles is such a super-friendly little guy, and he loves attention of any kind. He's a pretty active youngster, so I will do some little chimp TTouches down his back, let him go, then try a few more TTouches, let him go, etc. He is generally purring the entire time you have contact with him. 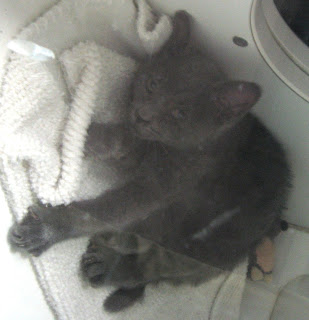 There was a new little gray kitten Cleo, who was very sweet, purring the entire time, as I did ear slides, abalone on body and a few mouth TTouches. 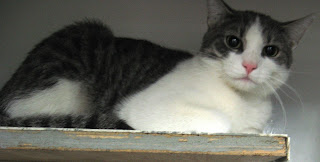 Pattie, who has always been shy but not hesitant about being touched, flinched every time I moved my hand towards him today. Each time I would start to reach in, he would get ready to swat. I got in a few TTouches and left him alone. I did talk to him quietly and offered him Reiki. He seemed to crave touch, as he would start to come towards the front of the cage or stretch out on his side as I did this, but again, if I started to reach in, he was very startled. So I had to take a step back and offer Reiki from a dhort distance away, speaking in a soft, reassuring voice. 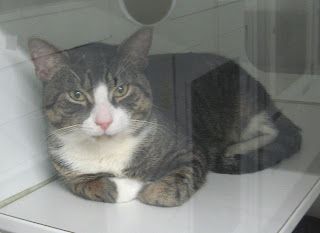 Max II (below), Andy and Jack (one of them is pictured above, not sure from the sign indications which is which) are three young cats who are in the same large cage. They had recently arrived, and seemed a bit traumatized, so I went slowly, trying to gauge how much contact they were ready for. Max II was lying in the back of his cage, stretched out with one of his paws sticking down through the hole into the lower level of the cage. He was shy, but gentle, and I spoke to him softly, telling him he was in a safe place and doing some little raccoon TTouches on his forehead and around other parts of his head. The forehead can be a very calming area to work on an animal who seems emotionally traumatized. I also did a few TTouches down his body, keeping the first session with him short so as not to overwhelm him. Andy and Jack are two little tabby and white cats, it wasn’t clear which name went to which cat. The smaller of them is more shy, and was huddled in the back of the cage. I tried some raccoon TTouches on his head, and noticed that he started to breathe more fully. Gradually I worked in some TTouches on his body, then went to his pal, who looked a bit skeptical. I started with him using the back surface of my finger (my fingernail actually) to do some circular TTouches on his head, and saw him slowly start to let go and get very sleepy. After a few TTouches on his body, I let them be. 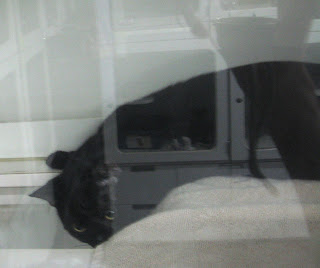 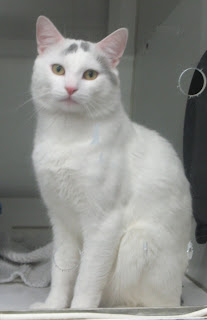 Johnny (above and below), who was a bit shy the first time I saw him as he had just been neutered, is totally friendly and sweet. I let him out of his cage and did abalone and clouded leopard TTouches, as well as ear slides. I also did Tarantula pulling the plough (I will have to get a video of this up, it’s hard to describe but it is a touch where you are walking your fingers down the back, sliding your thumbs along, which are at right angles to the fingers. 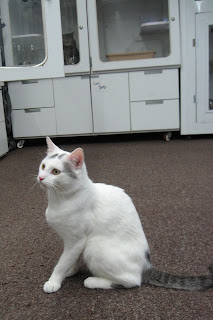 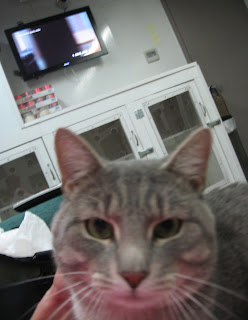 Max is a sweet cat, who is very eager for attention but can get over-stimulated sometimes. I imagine especially for the younger cats it can be so hard to be contained in a cage, that when he gets let out of the cage he needs to run around and let off some steam first. I do TTouch on him a little bit at a time, doing a few clouded leopard TTouches down his body, giving him a break, etc. 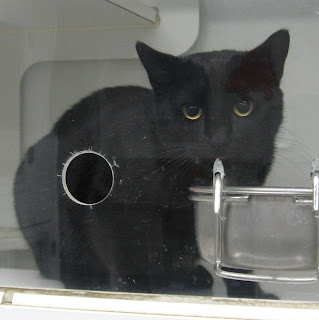 Serena is a shy cat I have been working with for a few weeks. She still prefers being touched with long-handled things like a paintbrush, but she is getting more at ease each time. Today she hissed at me at first when I opened the cage but the minute I started to do some circular touches on her with the flat paintbrush, she began rubbing against it, purring and drooling, very comfortable. Little by little I started working my hand down the handle of the brush and was able to get in some TTouches with my hand – some clouded leopard and abalone TTouches on the body and a few raccoon touches on the head. I would just do a few touches with my hand, then go back to using the brush, as that is what she is still most comfortable with. But it is great to see her really coming along. Afterwards, she always goes to her food bowl and starts munching away. 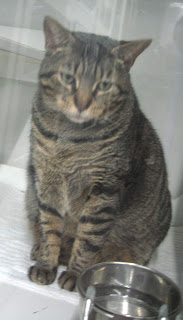