TTouch and Reiki with Mr. Whiskers and Friends 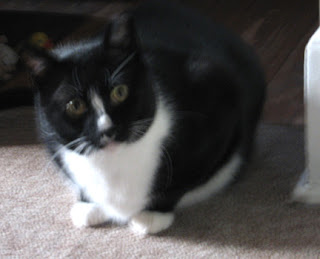 Sorry it has taken me a while to get this post up, as usual, I'm juggling a lot of things!

Kathy is a friend and Feldenkrais teacher, and she has also been to several TTouch trainings with me. I have worked with her animals, including some feral cats and kittens, and it is always a pleasure and a learning experience.

Presently Kathy is residing with her mother and they have in their household four cats: Scooter and Cuddles, who have been in the household a long time, and Mrs. Patches (pictured below) and Mr. Whiskers (pictured above), who were feral cats she trapped and spayed/neutered (Mrs. Patches was trapped along with her three kittens, the kittens were socialized and adopted). Mr. Whiskers had been released after neutering but then brought back inside, as he appeared to be friendly and it would be safer for him to be inside. I did a lot of work with Mrs. Patches and her kids (some of the posts are here) when they were first brought in, and a little work with Mr. Whiskers when he was initially trapped. I had worked with him while he was in a carrier with the TTouch wand, and he was quickly responsive to that, calming down quite quickly with some light circular ttouches using the wand, sticking it through the bars of the carrier. Some cats are threatened by a sticklike object coming their way inside a contained space but Mr. Whiskers was surprisingly not. 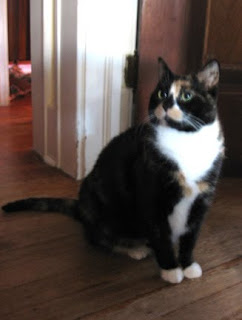 Mr. Whiskers and Patches have been living in the upper part of the house, and are extremely bonded with each other. Scooter and Cuddles live in the lower part of the house. Kathy also has a wonderful dog Mia, who I have been acquainted with for a number of years - she is having some issues as a senior dog, but she is a sweetie! 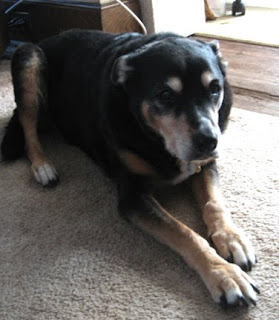 Mr. Whiskers has been exhibiting some very strange behavior lately - getting very freaked out, with ripples on his skin and generally seeming ultra-sensitive. He was diagnosed with feline hyperesthesia syndrome. It can be allergy related or a sign of a more serious problem--organ issues or cancer. Kathy has posted about it with links on her blog http://catsofwesttenth.blogspot.com/ if you'd like to read more about it.
The vet has put him on prednisone to see if it will help the itching that he has. Kathy asked if I could come and try some Reiki and TTouch with Mr. Whiskers to see if it could be calming for him.
I hadn't seen Mr. Whiskers since he was first trapped, and he was rather shy initially. I tried to do a few circles on him using the feather end of a stick toy, and he initially ran away. He's very attached to Kathy, so while Kathy was petting him, I was able to do some TTouches on him using the back of my finger and the back of my hand on his head and body. I used back surfaces of my hand and fingers as they are less threatening and less stimulating than front surfaces. Mr. Whiskers is so ultra-sensitive that I wanted to be as gentle as possible with him. He is especially is sensitive about being touched on his back end and generally does not want to be touched there.
After this, I offered him Reiki. I found that I needed to be 6 inches to a foot away in order for him to feel comfortable, as the energy was too overwhelming for him if I was any closer. I connected with Reiki with him several short times, the longest being when I was about a foot away and he stayed very still, absorbing the energy as though absorbing warm sunlight.
I also connected with him for very short moments with TTouch, but the Reiki periods of time felt the most powerful with him, as though he wanted to soak up the energy, but could only do a little at a time.
After this, I briefly did a few strokes using the back of my hand with Mrs. Patches, but she was mostly in a mood to play. Then I did some TTouches on Mia and Cuddles. Kathy does a lot of TTouch on Mia, and Mia loves the TTouches, so she was very responsive as I did abalone TTouches, clouded leopard touches and some ear work. Cuddles I just did an extremely short bit of TTouches with. Scooter (pictured below) was not interested in being TTouched, though last year I connected with him very strongly. I respected his wishes and just quietly spoke to him for a short bit, sending him a bit of Reiki from a couple of feet away as I spoke to him. 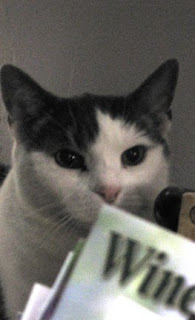 When connection with the animals comes in small bursts like this, it is harder to get a sense of a feeling of the session as a whole, though I am actually getting a better sense of it now as I write about it! Anyway I left there knowing my intention was very focused but a bit unsure as to what had just happened there.
Later that night I was surprised (and happy) to hear that Mr. Whiskers had not had any episodes that evening, and that Scooter was very peaceful. Since the session, Mr. Whiskers had one bad episode (which Kathy thinks was related to something he ate), but she said, other than that incident, that there was a calming effect on all the animals in the household that lasted a week, maybe more. Kathy would like me to come and work with Mr. W again soon, so I'm looking very forward to doing that. Many thanks to Kathy and your sweet animals, for reminding me of how true the TTouch saying that it is "moments, not minutes" that matter.
Posted by sarahsuricat at 11:02 AM