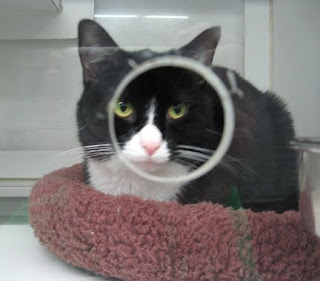 This blog post covers my past two sessions with the Mayor's Alliance Rescue cats who I work on through Tavi and Friends' TTouch-in-Rescue program.
Above is Oreo. When she first arrived at the boarding facility, she tended to get a bit over-stimulated, but after a lot TTouch and socialization by me and others who come to work with them, she has become more relaxed. Oct 25 she was really ready for attention when I opened her cage, and as she has done other times, put her paws on my two shoulders. This time she came up and kissed me right on the face. I did TTouch on her in that position, which sounds a bit funny but she was comfortable in the moment there. I did chimp TTouches and strokes down her back, as well as ear slides. What a sweetie! The following week, I saw that she was no longer there. While of course I will miss her, I am so glad that she has gone to either a foster or forever home, hooray. 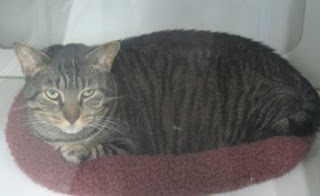 Tiger is a sweet, gentle cat who initially can get a little frozen when he first comes out of his cage. On Oct. 25, he at first clung to the rug when he was first out of his cage, but he soon settled down and stretched out after I did some connected clouded leopard TTouches and abalone TTouches going down his body. The second day, he seemed to want to stay on his bed in the cage, so I did TTouch on him there. He seems to especially respond to circular TTouches which use more of the hand, like the abalone TTouch, as this can be especially warm and soothing. 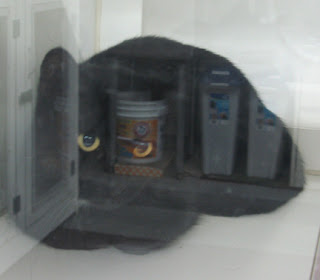 This beautiful cat above, Serena, arrived sometime in between the two sessions, so I saw in the second session. She was very afraid, so I did not touch her directly with my hands. When I opened the cage, she hissed. so I very quietly did some circles and strokes on her body with long-handled paintbrushes for a short time. After giving her a break, I tried again, but that was enough for her. When I left her cage, though, she seemed like she had calmed down somewhat because she was no longer in a frozen position - she went on the upper level of her cage and began to eat vigorously. 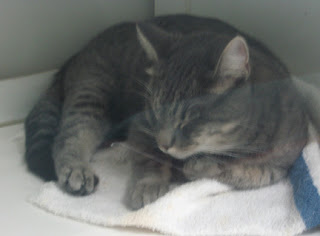 Olivia is a new grey tabby who arrived shortly before the Nov 1 session. She is gentle and affectionate, and wanted to come out of her cage. I did clouded leopard and abalone touches on her body, ear strokes and mouth work, and she was very friendly and responsive to all of these. 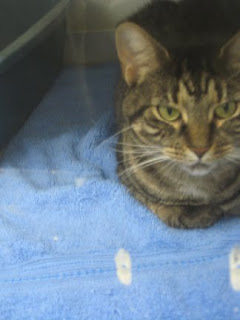 Above is Bree. She has a sense of humor and is kind of a character. She gets extremely excited to jump out of the cage and run around, so I let her do this before trying to touch her. She is very affectionate but can get overstimulated easily, so with her I do TTouches, usually chimp ttouches and llama ttouches which use the back of my hand, and for a short time and then I give her a break. 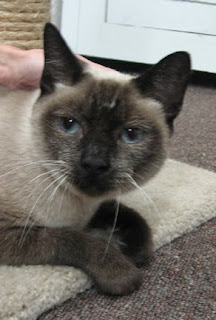 Millie was right in front of her cage to greet me for the Oct 25 session. She especially responds to TTouches on her head, and she rubbed her face against my face as I did ttouches on her head and ear area. She was a little more hesitant being touches on the body, but slowly getting used to it as I did a stroke on her here and there.
In the second session she came out of her cage and was very responsive to ttouches both on her head an on her body. She was head-butting me often at first and very excited. After a bit, her paced relaxed and she stretched right out on the rug for some abalone ttouches and clouded ttouches. she is such an alert, interesting cat! 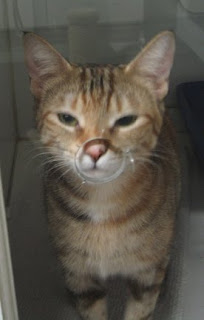 Cheeks is a real character and is always up for attention and for coming out of her cage, but is afraid of other cats, so sometimes she seems to get a bit nervous when she sees the other cats, so of course this is a bit of a tricky wicket! She is extremely friendly to people though and put her paws on my shoulders to come up to my face for a kiss!. I did ttouches with the back of my hand mostly with her, to try to calm her energy a bit. 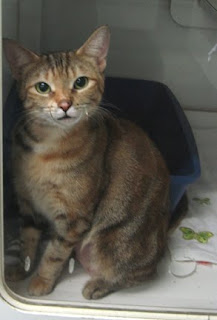 Martini and Mimosa (below) are sweet, playful youngsters. Uusaly they are much more interested in coming out of their cage to tear around the space and be kittens. but once they wear themselves out a bit, they can be picked up for a little TTouch (especially the one with the most white on its face, not sure which is which!!). They purr the entire time that you hold them. I do little raccoon ttouches on their mouths, very gentle ear strokes, and chimp ttouches boinb down their bodies down to their tails. 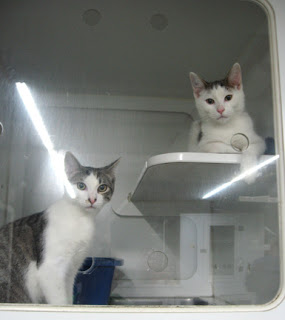 Posted by sarahsuricat at 12:06 PM