TTouch and Reiki at BARC: Jan 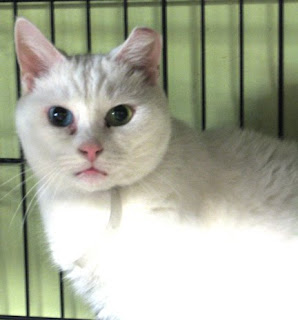 Jan is one of a bunch of cats who arrived at BARC recently after his owner passed away. He is a gorgeous boy with one blue eye and one green eye. When he first arrived, he was quite frozen in the back of his cage, and it took some coaxing to even get him to eat at first.

Now he is feeling much more comfortable and, though he still prefers to hang out in the back of his cage, he comes to the front for his food, water and treats, and after receiving TTouch for a bit, will start to come to the front as well. 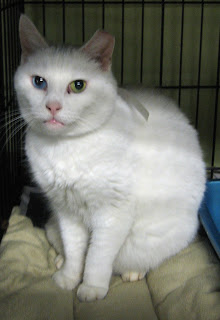 I found that he, like another scaredy cat from the same household, Statler, holds a lot of tension in his lower back near the base of his tail. And, if I begin to do raccoon TTouches all around this area, it seems to be the key to unlock his whole feeling and way of being. After some TTouches in this area, he will start to roll over on his side or start rubbing his head against my hand or his cage, and he starts to come a bit forward to me. Another area which is starting to be a great area to TTouch is around the outside of his mouth, as well as doing some strokes underneath his chin. He is now responding to touch in this area in a similar way, rubbing his head against my hand, flopping over on his side sometimes.

He is a very endearing boy and it is such a pleasure to feel his personality emerging, the more he gets comfortable like this. Recently he has been a bit more comfortable with other volunteers and staff touching him as well. He has never made an aggressive move whatsoever, but would just be frightened, glued to the back of the cage, unresponsive to touch. but I think this is little by little starting to change. These frightened beings have so much to teach us about patience and compassion, and I thank you Jan for that.

A side note: I also have to give a little plug for Halo's Liv-a-Little chicken treats, and big thanks to my friend Cookie from the Homeless Cat Network in the SF Bay Area, who told me about these treats. These treats are simple, just freeze-dried chicken, and they have been so helpful in addition to TTouch and Reiki in breaking the ice with a lot of scaredy cats like my buddy Jan. You can find these treats in pet stores or even cheaper online.
Posted by sarahsuricat at 12:15 PM