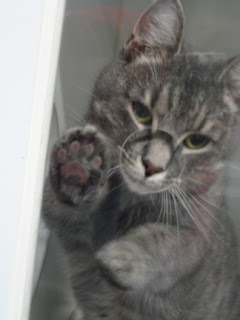 Today when I went to work on the Mayor's Alliance cats thru Tavi & Friends' TTouch in Rescue program, most of the cats were gone, meaning they have been adopted or are being fostered, which is great news. So the ones there were there got some extra attention :)

Olivia (above) is a lovely young grey tabby. When I took her out of the cage, she was so happy to be out that she was more interested in running around than chilling out for some Ttouch, but I did get in some soothing abalone TTouches on her (circular touches using the whole hand). She is an extremely friendly, social cat and was rubbing against my hand. 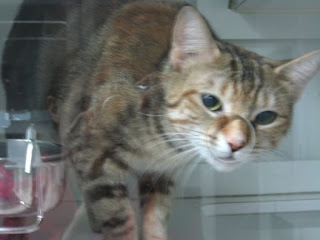 Cheeks (above) is also young and peppy. He really responds to the TTouches though and rubbed himself right into my hand as worked with him. For him, I did mostly abalone TTouches and clouded leopard touches down his body, as well as ear slides. 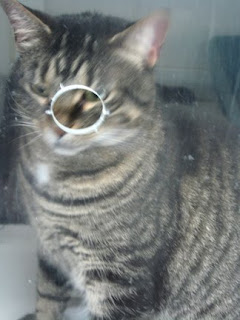 Bree (pictured above), was also quite restless and so when I let her out of her cage I gave her some time to let off steam before I began to touch her. She can tend to get over-stimulated easily, so I find that touches with the back of my hand are less stimulating and more calming. I mostly did llama ttouches with her (circular TTouches using the back of my whole hand), as well as Noah's March (straight strokes down the whole body). These did seem to calm her energy somewhat.
In addition to these cats was Serena, a cat who is pretty frightened of people, but slowly getting less so. I will speak about her in a separate post.
Posted by sarahsuricat at 11:56 AM