TTouch and Reiki at BARC: Siskel 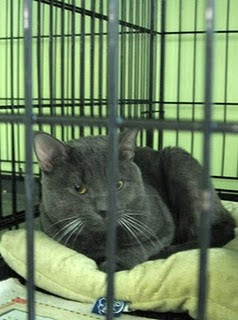 Siskel is a young male cat who arrived recently at BARC shelter along with another cat thought to be his brother. The brother was extremely friendly and was adopted right away. Siskel arrived at the shelter completely terrified, hiding in the back of his cage and hissing when people came anywhere near his cage. I think it really scares him to have hands come in and out of his cage, as he seems to especially feel threatened when his cage is cleaned.

I have been working with him quite a lot, wearing thick gloves in case he gets over-stimulated, as sometimes in the beginning he would go from comfortable to suddenly terrified, and then could swat or try to bite. He has been getting SO much more comfortable lately, it is a pleasure to see.
I have been working with him primarily using a long-handled plastic back scratcher, doing circular touches and strokes on him with the back of the hand of the back scratcher, as well as with the handle. Once he got accustomed to this tool, he quickly grew to really like it, starting to roll on his back or side to be stroked with it. I have now started incorporating some touches and strokes with my gloved hand as well as with the tool. I am trying to be careful to keep the sessions fairly short, so he doesn't have the chance to get over-stimulated. I have shown a few people how to work with him with the back scratcher, so he can get used to other people having contact with him.
He was initially in the back of the room, but is now in a cage next to gentle, sweet Camilla, who I think is a reassuring, calm influence for him. He often rubs himself against the side of the cage which is next to her, and has never hissed or done any unfriendly behavior towards her. When I do TTouch and Reiki with Camilla, he watches and seems to be very calmed by this work as well.
He seems more comfortable in the shelter in general, now hanging out in the front of his cage a good deal of the time, watching what is going on. And if I am working on another cat, he looks at me as if to say, when are you coming to visit me?? I know that many people who saw his initial behavior would brand him as a "bad cat" (which I always take to mean one that is not capable of change) but I am so happy to continue to work with him to show that he is not a "bad" or "mean" cat, but is a very scared cat who needs time and patience in order to build trust :)