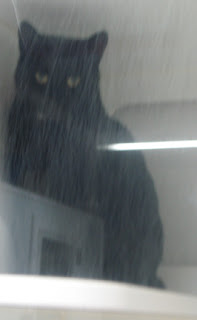 Serena is a recent arrival at the boarding facility where there are a number of Mayor's Alliance rescue cats. I do TTouch on these cats through Tavi & Friends' TTouch-in-Rescue program.

Serena is still extremely frightened, and still will hiss when I first open the cage, but if I work very quietly with her, using the long-handled paintbrush you see here, she calms down and will start rubbing herself against the brush, becoming quite comfortable. She got a little more nervous with the camera on, but when I stopped the camera and began to work on her without the camera on, she became even more at ease, rubbing her face and body against the brush, leaning into the brush, and she even began to purrrrrrrr, which was such a pleasure to hear.

I gave her several breaks and tried this again with her several times, so by later in the session she was less apt to hiss when I opened the cage. Eventually when she is more at ease, I will inch my hand down the handle and eventually touch her with my hand, but I didn't want to push the issue. I look forward to working with her more!

Posted by sarahsuricat at 6:04 PM