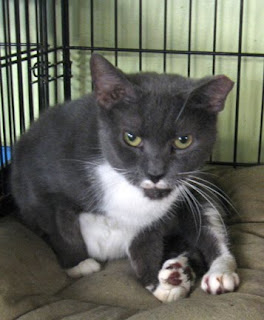 Dr. Teeth is a beautiful grey and white cat who arrived a few weeks ago at BARC Shelter after her owner passed away. I believe she was given her name because she has very few teeth (you can see her tongue sticking out sometimes, probably because there are not teeth to keep it in her mouth). She is extremely shy. When you approach her, she still hisses and will swat towards you, but I have never had her actually swat me. I don't believe she is aggressive, just frightened.

When I began working with her, I used a long-handled plastic back scratcher, using the back of the hand of the scratcher to do circles and strokes on her back. In the beginning I could only do a few strokes or touches, and then would back off, always facing sideways to the cage, and would wait to see her breathe and calm down, speaking in a quiet, calm voice to her. After some days of doing this, she started to settle as I did the touches on her with the back scratcher. It is very important to orient your body sideways to the cage, especially with a frightened animal, as this is a much less threatening body posture.

I then wanted to try a tool with a shorter handle, so began to use a flat long-handled paintbrush, sometimes doing the circles and strokes with the tip of the brush, sometimes with the flat part of the brush. She responded to this tool well, and though she still would start out with a hiss, once I touched her with the brush, she settled, tucking her front paws underneath her body, blinking and licking her lips. 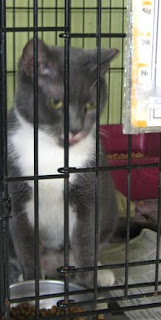 Each day I worked with her, I tried to just push her a teeny bit past her comfort level to get her used to a bit more contact. Little by little I started working in a few touches and strokes on the head, then would go back to her body, as she is frightened of being touched on her head. I then changed tools to a back scratcher with a shorter handle and what looks like a small plastic hand at the end of it, using the back of the hand to touch her. She responded to this new tool as though she found it possibly more relaxing than the brush.

Then, a couple of days ago, I decided to take the plunge. I worked my hand slowly down the back scratcher handle, with my hand behind her head, and began to do some circular touches on her body with the back of one finger. I was afraid she would be startled at this different, warmer and more flexible surface, but she settled right in. And I was able to start incorporating some little circles, sometimes with the back of my finger and sometimes with the front, on the back of her head and neck area, and she started to actually relax into this. I sometimes went back to touching her with the back scratcher, doing gentle strokes, and she really stretched her back out. 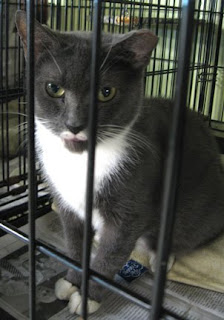 It is such a pleasure to see this sweet cat start to be more relaxed, and to be more comfortable being touched. When she first came into the shelter she was always in the back of the cage. Now she often is in the front of the cage, very interested and engaged in what is going on. And though she is still initially frightened when you approach her, I believe that with more time, she will begin to be more trusting and less frightened on initial approach as well. I can't wait to work with her again.

Posted by sarahsuricat at 12:09 PM