Staying in the Moment with Garbanzo 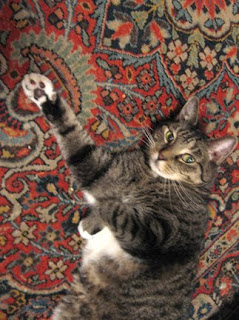 Hi folks, above is my own cat Garbanzo, who is nearly 16 years old, and full of life, as you can see! He is a dear soul and has been my TTouch guide for my whole TTouch journey, as he led me to TTouch in the first place. I feel gratitude for him in SO many ways.
A point I'd like to make is that sometimes if an animal is not receptive to a particular touch or TTouch tool one time, that situation can change over time. Several years ago, I tried doing circles on Garbanzo with a jelly scrubber, which is a tool used for TTouch with a variety of animals. He absolutely did not like it and let me know! I decided that it was not for him and left it at that.
However, recently I decided to try this on him once again, several years later and a bunch of TTouch trainings later (meaning Garbanzo had a lot of TTouch from me during this time as well). So, whether it was further sensitivity on my part, changing sensitivity on his part, or what, who knows, but now he loves having gentle circles done on him using the jelly scrubber. I use the more bristly side towards his fur, and do the circles with about a two pressure. This tools is also wonderful for getting sensitive animals acclimated to being brushed and brushing young cats who have very short fur. So if you are using it for these purposes, you can do some circles, then a little brushing, etc.
At any rate, this event was a reminder once again to stay in the moment with TTouch, and sometimes I think we have to remind ourselves a bit further of this with our own animals. Thank you, Garbanzo!
Posted by sarahsuricat at 10:15 AM