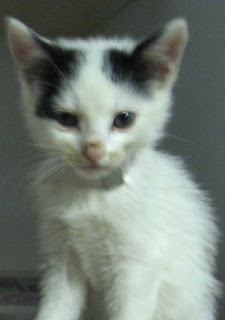 Yesterday I went again to Social Tees to work on some of the new critters, especially the very young kittens. I was happy to hear that they were all eating heartily, that is always a good sign. My two tiniest new little friends came right to the front of the cage, especially this little white one. She seemed to have more energy today than yesterday, and was eager for me to take her out, so I did. I sat her on a little towel on my lap as I sat on a table, and positioned myself with my left hand around her chest area and my other hand was doing TTouch on her, so I could easily contain her in case I needed to quickly contain her. Again, she was very receptive to raccoon touches around her head area, including around the mouth area, and very gentle ear strokes. I did raccoon touches, baby chimp touches, and sometimes abalone touches down either side of her back. These all seemed quite soothing. When she got restless, as though she had enough, I put her back in my cage. The funny thing was that she wanted to come right back out with me again! I did, but not until I had Ttouched her other three friends in the same cage. The little black and white kitten below is the second extra-tiny one (I think he is the tiniest of all) and he came out with me second. He settled right in for some raccoon touches on his head and body, and some little ear strokes. He appeared to be quite soothed by the TTouch, and also looked at me as though he wanted to come back out when I put him back in the cage. 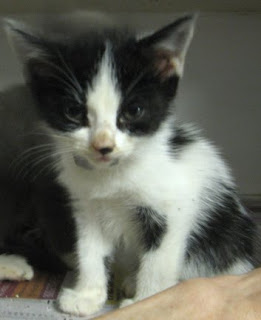 Then I took out one of the "larger" small kittens in the cage, a little grey tabby. This one was more active and squiggly, so I just kept it out for a short time. It responded to TTouch but was in a real mood to explore so it was safer to put it back in the cage, though it really didn't want to do that! I decided that for that kitten and its other friend, a smoky-grey kitten, it would be easier to do TTouch on them inside the cage, as I didn't want to risk them getting loose in the space. At first those two kittens seemed to be a bit confused by TTouch, as though it was a new way of being touched and new way of feeling, but they responded to it well and would come back to me if I took my hand away. Later I took the two extra-tiny ones out again for some more TTouch. Below you see three of the four (the tabby is behind this little clump of kittens, I think) relaxing, as the white one looks at me and wonders what I will do next. 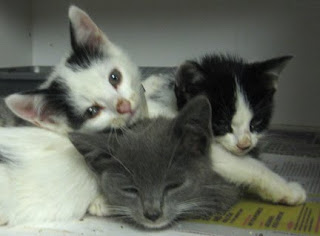 Next to this quartet is a cage with two "larger" kittens, probably a few weeks older - a black kitten and a tortoise-shell kitten. The black one was quite shy when I first put my hand in the cage, as you will see from the picture below. It softly hissed at me when I started to touch it but the hissing went away once I did a few strokes and raccoon touches on its head. I would work on its head for just about half a minute, give it a break, work on the other kitten and then come back to it. It had pretty much stopped the initial hissing by the time I was done. The other kitten moved away at first but settled pretty much once I began to stroke it with the back of my hand and do some TTouch on its head. After this, I worked on some other cats then later came back to these two. They seem to be gradually getting used to contact. They look a little more relaxed below. Meanwhile, today the tabby I spoke about a couple of posts got adopted today, hooray! 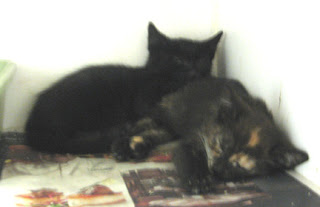 Posted by sarahsuricat at 11:23 AM