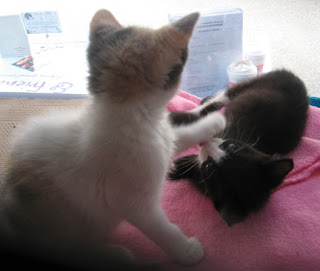 I spent yesterday volunteering at Tavi & Friends (http://taviandfriends.org/) fundraiser and animal wellness fair in Mineola next to Best in Show Pet Resort. A bunch of my pals from TTouch trainings were there to help out as well, so we had a great time. There were people from various local animal organizations and rescue groups there, as well as a bunch of wonderful cats and a couple of dogs up for adoption. The animals were there courtesy of freeport animal shelter (http://www.freeportanimalshelter.org/), A Home at last (http://www.stfrancis.petfinder.org/) and Tavi & Friends. In the photos directly above and below are two kittens having a great time wrestling. 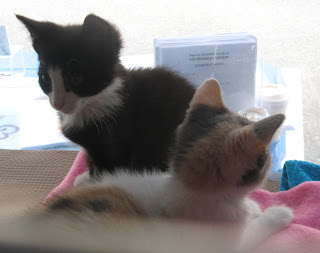 I did TTouch on many of the dogs who wandered by the fair. There was a very large dog who was some kind of houndlike mix who settled right down on the ground and wanted to take a nap after some abalone touches on his body and raccoon touches on his head. The founders of Tavi, Mary Bruce and Peggy Marks, and TTouchers Marge Piatak and others did TTouch on the dogs up for adoption and other dogs who came by the fair. 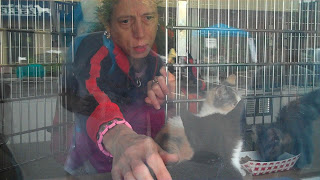 And of course I had to visit with all the cats up for adoption. Jason Goodman from our group also spent a good deal of time in the animal van with me doing TTouch on the cats. Above you see me working on a lovely little black and white kitten, once I started touching him, he was eager to receive more and came right to the front of the cage as you see below. 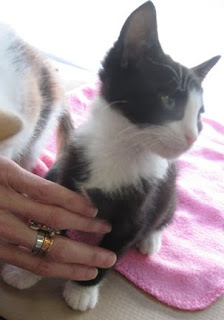 Below is Jason doing TTouch on Sally, who was quite frightened when she first arrived, but after Jason and I both worked on her, she was much more relaxed. 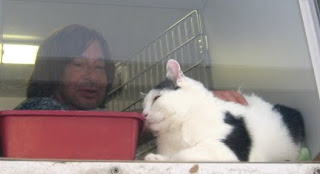 Below is Kali, who is a sweet little cat. Unfortunately she occasionally has seizures. She looks a little concerned in the photo, but she was very friendly and delightful when I did TTouch on her, she nuzzled against my hand as I did TTouch on her head and I felt her body vibrating with a quiet purr as I did chimp touches down her body. I am sure that the right person is out there for her. She is a dear little soul. 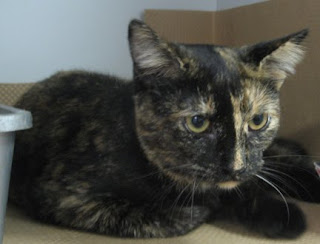 In the two pictures below you will see the little guy who tried very hard to come home with me yesterday. He is several months old and his name is Andy. He called to me from his cage, and when I opened it he was pleased to receive ear strokes, Noah's march down the sides of his body and chimp touches. He kept nuzzling against me and so I took him out and held him for a bit, continuing some chimp touches while I did that. He's a very loving little guy and I'm sure he will find a great home soon. 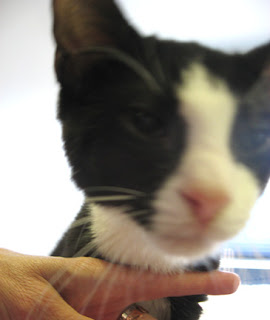 Here he is again below. The pictures are blurry but sometimes that is how I feel when I am doing TTouch, like everything is a little dreamlike and fuzzy and cozy. This is also how these animals appear to me sometimes in my dreams, which they are doing more and more often. 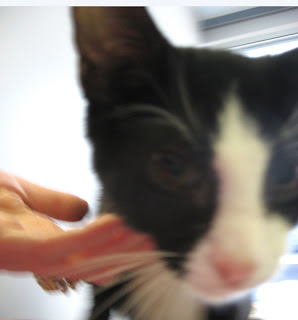 Below is a tiny little kitten who was being bottle-fed every two hours by the kind people from the rescue organization who had taken him in. It was amazing to do the tiniest little raccoon touches on his head and to lightly touch his ears. 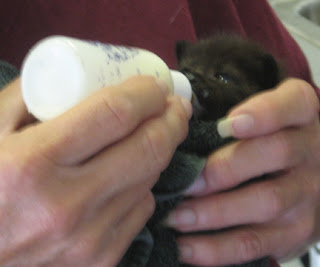 Posted by sarahsuricat at 12:47 PM