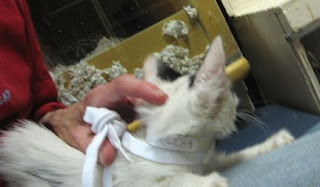 In my last posts I showed you how I made the kitten harness on a beanie baby, and here it is in action on a real live kitten. Above is one of my tiny friends receiving some raccoon touches from me while I hold on with the shoelace harness. I had to wash her little face again because she had just eaten so I cleaned it off with a damp paper towel, which I put my finger inside so that I could clean her a bit and then do a few TTouches through the paper towel. After that was done, I used a tiny makeup brush that is for brushing out eyelashes and I was able to brush her fur a bit. I did raccoon touches on her head and raccoon touches and chimp touches on her body. She is a very tiny kitty! She settled right in and at one point put her little head down to take a snooze, making a little miniature purr. 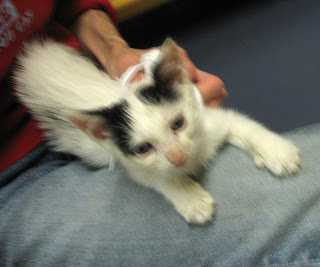 Below you see that while I was doing TTouch on the kitten, one of the dogs also decided to take a snooze. I am sitting up on a table. The kitten is peering over the edge of my leg to see the dog, and is held safely as I have her secured with the little harness. 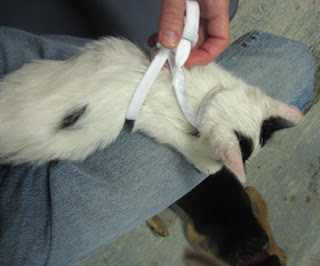 Below on the right you see her re-joined with her three kitten friends. Later yesterday the two "older" kittens (who are a good bit larger than my little friend and her tiny b/w pal shown below left), were adopted by a nice young woman. I wish them well! 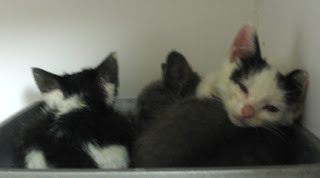 Posted by sarahsuricat at 12:10 PM