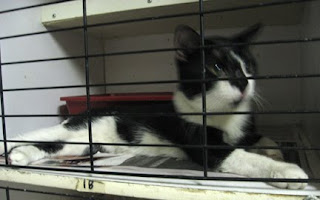 Hi folks, the handsome cat who is at Social Tees Shelter (http://socialtees.com/) above we have been calling Jigsaw Sr. He is a delightful, friendly cat but unfortunately has a problem with one of his front legs. It is a healed injury which has left him with the bottom part of the leg and foot limp. His name is because a while back we had a kitten we named Jigsaw with similar coloring and the same leg problem on the same leg!

Apparently the poor guy was found on the Williamsburg bridge. There was no info on how his leg was hurt, but perhaps he was hit by a car. The injured leg is the front left leg, and when he walks, he ends up landing either on his knee (if he puts more pressure on it) or on the bottom joint before his foot (if he is putting lighter pressure). He can get around, and can go from the upper shelf in his cage to the lower shelf, but rather gingerly, and walks very low to the ground.

This cat comes to the front of the cage and meows to me for TTouch when I come in the room. I started out by working on his head, doing raccoon touches, ear strokes and a little work on the outside of his mouth. He responds to being touched in general, and seemed to want me to do quite firm ear strokes on his ears. Cats all seem to have different preferences, especially when it comes to doing ear strokes, so it's better to start out lighter at first and see what happens. Sometimes they will start rubbing their head against you as though they want you to press harder.

Then I did connected chimp touches and clouded leopard touches down either side of his back, and some strokes with the back of my hand down all of his legs, including the one which is not working. He is more sensitive on the lower back and thigh of the back leg on his left side, though he still lets me touch him there.

Over the past few sessions, after talking to some of my fellow TTouchers, I have added some more touches. Among other things, I have been able to work on his paws on all four feet. I have done little raccoon touches all around the toes and on the pads of the feet, and have done little circles with the toes, especially on his front feet. The point is to bring awareness to as much of his body as possible. I will be very interested to see what happens after a few sessions with him.

He is incredibly cooperative and often wants to jump out of the cage into my arms! What a sweet fellow.
Posted by sarahsuricat at 8:58 AM