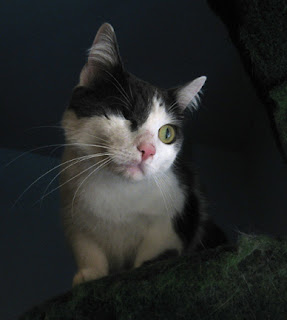 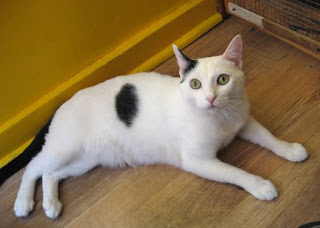 Yesterday I was back at Whiskers Holistic Health Care, where I have been going to do TTouch on three rescue cats the past 3 Sundays. Above is a picture of one-eyed Wilma from yesterday and a picture of Bele from last week. The really nice news, sounds like Lokai and Bele are soon to be adopted and there is interest in Wilma as well, so I'm crossing fingers for all of them.
To get back to the subject of the above heading, yesterday in I went to visit these three cats and they gathered around me looking very eager. I opened my bag, as Wilma likes to go in and snuggle there. She was even more interested in it than usual, and started digging inside. I had forgotten that I had left some packaged samples of dry food in there. Anyhow, she was happy to receive TTouch as she was busy in the bag. She found the treats and tore into the treat bag. The other two cats got crazy about the food being in there as well. A few minutes later I found out from the people at Whiskers that the cats were probably hungry as they were going to be fed pretty soon. They were ok with the cats receiving treats, so we had treats and TTouch, alternating between one and the other. I took the treats out of the bag and put them inside another plastic bag and behind me to hopefully get them out of mind. We did get in some nice TTouch with the wand with an ace bandage wrapped around the end (we call it a corn-dog) and some abalone touch and other types of touch, including some belly lifts on Lokai. Their concentration and patience seemed to be less than usual because they were hungry and somewhat distracted, wondering when/if more treats would be produced, so next time I will try to go at a different time when they are not apt to be so hungry! On the very up side though, Wilma, who is by far the shyest and most reluctant of the bunch, is getting more and more comfortable around me, and likes to sit right next to me now for much of the time, even if she is not in the mood to be touched all of that time. It feels like a breakthrough for her to be comfortable and content in close proximity to a person. Another NEW thing we tried yesterday was using a fuzzy paint roller (no paint on it though!!) to do some TTouch and Wilma loved it. Also, I actually had two cloth bags plus a towel spread out on the floor around me and the cats really took to this, they were all snuggled around me on the soft surfaces.
Posted by sarahsuricat at 1:29 PM