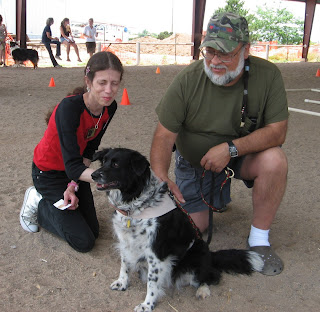 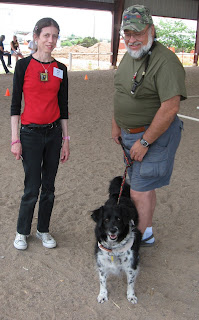 Today was client day at the TTouch training in Santa Fe, and I had the pleasure of working with Ed and his lovely border collie Chica. They have a very strong and special bond, which is beautiful to see. I have to say, as this was my first official client session within the TTouch training with people observing etc, I was pretty nervous beforehand, and at various points I wasn't sure what to do next, but thankfully Kathy Cascade stepped in to help me when I got to those lost places. We did end up with a very much calmer dog by the end of the session.
Ed's main concern was Chica's barking. I could see that the dog's energy was ramped up, First I put a wrap on the dog, explaining to him the purpose of the wrap. I did some TTouch on the dog as I explained this to him, and the dog was completely receptive to being touched just about anywhere on his body. He said he did massage on the dog, and I got a bit tongue-tied trying to explain the difference between TTouch and massage, but again Kathy came to my rescue demonstrated on Ed the difference in feeling between the two, which was great because we had some laughs in this process, and it is a good thing to keep a sense of humor going during these sessions!
I also showed Ed how to use a balance plus leash configuration and showed him some of the basic TTouches. As Kathy and I were explaining things to him, I was doing quite a lot of TTouch on Chica (who still had the wrap on) and I could really feel her energy change and let go into a very settled level. Also, initially Chica had been hesitant to be away from her owner but by the end I was holding onto her leash and doing TTouch and she was not trying to get back to him while this was happening. And even though other people and dogs were passing by and in the near vicinity, she didn't bark the entire time.
At the end, I asked Ed if he wanted me to go over how to put on the wrap, and he did a lovely job of putting on the wrap without any coaching. I gave him the wrap so that he can continue to use it on Chica. Thanks, Ed, Chica and Kathy, this was a great learning experience for me. And I also appreciated some very on-point feedback which I received from my fellow TTouchers on this session, so thanks to you all as well.
Posted by sarahsuricat at 11:58 PM