The New Gang at Whiskers, Brooklyn in da House 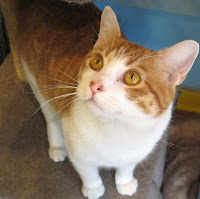 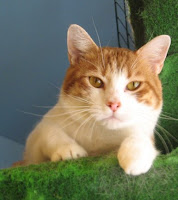 Yesterday when I arrived at Whiskers, kitty Brooklyn (above in his cat tent) had two new friends, Beyonce (the grey and pink girl) and Hamilton (the orange and white boy).
When I entered the window cat enclosure, Hamilton was on a perch up near the ceiling, hidden, Beyonce was hiding behind a cat bed near the litter box, and Brooklyn was in a cat tent. I approached them one by one very quietly and carefully.

First I approached Brooklyn in his cat tent. I asked him if it was all right to touch him. He was very shy, but let me touch him on his head and a bit of llama touch on his body. Then he hissed, so I used the wand a little bit and then backed off.

I then approached Beyonce, asking her if I could touch her and she was receptive right away, rubbing herself against me. I was able to do TTouch on her ears and all over her body. After a few minutes I moved away from her and more out in the open in the enclosure. I called to her and she slowly came out to me. Once she came to me out in the open section in the window she stayed there, receiving more TTouch and rubbing herself against me. There was a soft cat bed near where she was and she started kneading that with her claws. We did this for a while, then I gave her a break.

By this time, Hamilton was peering at me with his little face and paws hanging over his perch. I used the wand and corndog to do circles on his head and face, which he responded to and rubbed against the corndog. I then touched his ears and head with my hand. Soon came down from his perch and I did clouded leopard touches, hair slides (which all 3 cats really responded well to), chimp ttouch, zigzag and more ear touch. He was really craving the attention. I began to alternate between him and Beyonce, and before too long, both cats were in close proximity to each other and very eager to receive TTouch. He began kneading the soft cat bed with his paws, which was calming to him, and I was able to do TTouch on him for quite an extended period, as he kept nuzzling against me for more.

For a while I was working on Hamilton and Beyonce simultaneously. Sometimes I would just have my hand resting on Hamilton's back while I was doing slow clouded leopard touch on Beyonce. They seemed to be getting more and more comfortable with each other while this was happening.

Every once in a while I would then go back to Brooklyn very quietly. He was still very shy, so for a while, I would just do a few circles with the corndog and then back off. Sometimes he would initially hiss but if I persisted and just did light circles on his body or head with the corndog, the hissing stopped and he settled down. Later, after I had done a considerable amount of TTouch on the other two cats on every inch of their body and head, he was peering out of his tent, and I did some light, very slow raccoon touches and stroking of his ear, and he was blinking at me.

I was toning nearly the entire time I was doing all of this, which created a very calm bubble of space inside the enclosure. Both Hamilton and Beyonce began to groom themselves, and when I left, Beyonce was sleeping on the cat bed out in the open and Hamilton was on a perch more out in the open. I blinked at Brooklyn before I left and I know that he began to trust me more by the end of the session. I am holding good thoughts for all three of these dear beings to be in new homes soon! Please contact Whiskers (http://1800whiskers.com/)
if you would like to adopt any of these beautiful cats.
Posted by sarahsuricat at 12:11 PM