Yesterday and today we went to Santa Fe Animal Shelter and Humane Society (http://www.sfhumanesociety.org/). Yesterday we all worked on cats, while today most people worked on dogs, though several of us, including me, continued working on cats today. The shelter is quite nicely laid out. Many of the animals are in small rooms instead of cages, and there is a lot of outdoor space for walking the dogs. 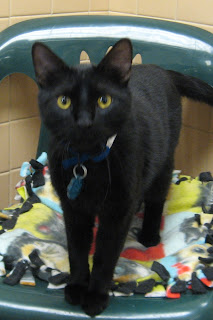 Yesterday I worked in a room with four cats. One of the cats, a grey long-haired cat named Elvin, was designated as a difficult cat. The other cats were Lua, a grey and white cat, Cammie, a black cat, and Sheila, a mottled brown and black cat. Cammie was by far the most social of the bunch, and she kept coming to my side when I was working on the other cats. I would periodically take breaks from working on the other cats and do some ttouch on her, which she really responded to, and at one point she looked me straight in the eyes to give me a kiss (Cammie is pictured above). 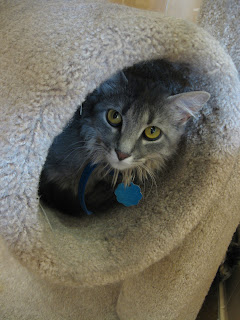 Elvin, as pictured above, was in his little fuzzy cylindrical space, so I approached him there. First I spoke to him, telling him I was going to be very quiet, and very gentle, and that I kept picturing in my mind someone very kind who would give him a new home. I first did small circles on his head with the wand and corndog, which he found relaxing and he began to turn his head, telling me where he wanted to be touched yet. I did these very lightly, as he is extremely sensitive. Then as he grew used to this, I then did some small circles using a fuzzy paint roller, and he enjoyed the soft surface of this. Then I was able to slowly begin to do some ear strokes and raccoon touches on his head. I periodically gave him breaks to make sure I was not overwhelming him. After a while he shifted in his little enclosure and had his back to me, so I slowly and softly tried doing abalone touches on his back, barely touching him at first to make sure he was all right with being touched there. He seemed to settle into it, so I continued for a while. I felt him relax with the continued contact. 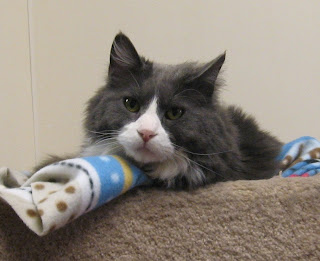 Then I moved on to Lua (above), who was lying on top of the cat condo. He had a grumpy face initially, and squeaked when I first touched him because I think he was a little startled. However, he quickly settled in as I did ear touches and raccoon touches on his head and then chimp touches on the body.
Cammie was checking all this out and I continued to alternate to her from time to time, as she kept nuzzling up to me as though she wanted me to do TTouch on her. She particularly responded to zigzag touches 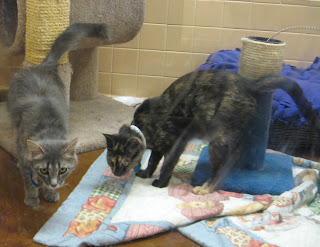 Sheila (pictured above with Elvin) was hiding in the back of the enclosure this whole time, so I approached her very slowly and quietly with the wand and corn dog. She ran away from me at first, but when I waited, then tried again several times, she settled down as I did circles on her back with the wand. This was enough for her today. Around this time, food was brought in for the cats so I told them all goodbye and that I hoped all the best for them.
I was happy to have the chance to revisit these four cats today. With Elvin, I was able to quickly transition from the wand to using my hand to first do raccoon touches on his head and ear strokes. He became more and more relaxed as I worked, and from time to time I would take a break and did some TTouch on the other cats, and when I came back to him, he grew more relaxed. I even was able to do some TTouch around his mouth and jaw. Eventually I was also able to do some abalone touch on his body. This all took place in his cylindrical space. He grew so relaxed that he curled up cozily in there while I worked and was ready to sleep. Then, to my delight, he came forth from the cylinder and out into the open. He ate some of his food, and then I was able to continue doing TTouch on him for a while out in the open space.
Meanwhile, today the other three cats were also very receptive. Cammie right away gave me a kiss and continued to be at my side, waiting for TTouch which I did on her intermittently, and Lua kept squeaking at me from his cat condo for me to do TTouch on him. He readily accepted TTouch on his head and ears and abalone touch on his body. He relaxed and spread himself out on the cat condo. Sheila was still a bit skittish but less so than yesterday and I was able to do TTouch on her directly with my hand, rather than having to reach for her in a corner. When I left, I told them all I wished the best for them, and Lua squeaked goodbye to me. 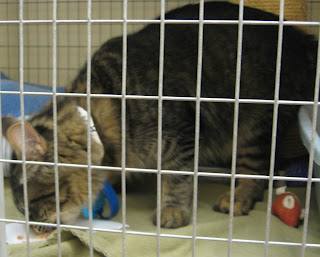 Next, I worked on the above cat, Roo. Unfortunately this picture does not do him justice. He is a gorgeous long-haired cat, who looks to be possibly part Maine Coon. He was designated as a difficult cat, though I found him to be friendly and he was not the least bit aggressive with me. I wanted to try to work on him outside his cage, so I was able to let him out in the room for a while. Unfortunately, he was so excited to be out of his cage, he was not really in the mood for TTouch, but I did manage to get in some touches on his back while I played with him with a cat toy. 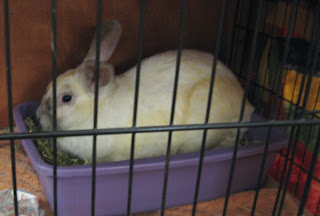 I also had the opportunity to work on a bunny. The lovely lady above is named Tessa. I did some nice ear slides and then some chimp touch and abalone touch on her body. She was quite cozy and settled with all of this. 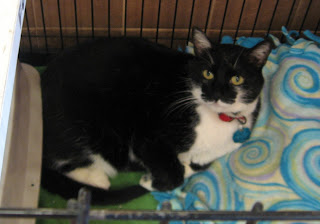 Above is Lita, who was initially a little shy but once she got accustomed to some small raccoon touches on her head, she settled into a cozy sleepy position. She wasn't ready to be touched on her body but she was very content with touches all over her head. 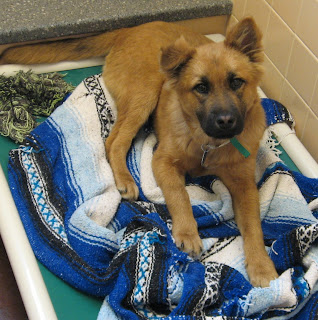 Finally I made it into the dog portion of the shelter and promptly fell in love with this charming girl above named Wanda. She is a German Shepherd mix, probably part Chow. She has a very sweet disposition and gave me a big kiss right away. I did ear touches, mouth work and clouded leopard on her body, then some python lifts on her legs. She seemed a little surprised by the python lifts but then settled into them, and they seemed to make her more grounded.
All of the above animals and more are up for adoption so if you are in or near Santa Fe, stop by the shelter!
Posted by sarahsuricat at 11:10 PM