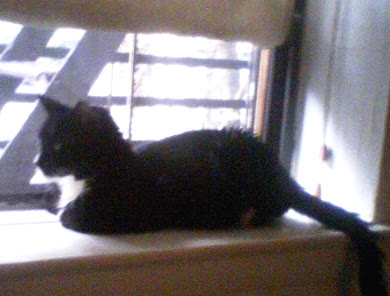 Doris is a lovely petite senior kitty, who lives with her guardian Mari and four other kitties (I was referred to them by my wonderful Reiki teacher, Sheryl Berger, http://reikiforyourlife.com). Each of Mari's cats has its own interesting story.

Doris has diabetes and was recently diagnosed with lymphosarcoma. The cancer is terminal, but Mari is giving Doris insulin, a good diet and supplements and doing what she can to keep Doris comfortable. Reiki and TTouch can help the body and mind to be in optimum balance, so can be a great complement to medication, good diet and other types of therapy, in an effort to help give the animal a better chance of remaining stable for a longer period of time.

Today was my second with Doris. Her coat looked better and her energy seemed better to me than last week. Mari agreed and said that the supplements and improved diet have been helping her to feel better.

I started out by doing TTouch at first on her head and a bit on her ears. Then, as she did last week, she ate and drank, then settled behind the couch, though she was close to the edge of it. I sat on the floor rignt next to the counch offered her Reiki from a foot or so away from where she was. I have found her to be most receptive to Reiki from a short distance away, as she is SO sensitive. Reiki for animals is most often best started at a bit of a distance, so that you can see what the animal is most comfortable with. Some animals are comfortable with hands-on Reiki and others are not, or may not be at least at first.

As I continued sending Doris Reiki, she settled in, stretching out and stretching one of her front paws out towards me. I felt her very strongly absorbing the energy: my hands and whole body felt pulled towards her by the Reiki energy, as though she were a magnet.

After a long stretch of time, she took a break, walked around and ate some more, then settled again near a ladder. I sat on the floor near her and held one hand about six inches above her head and neck and the other hand was facing her body. I follow my intuition as to where my hands are most of the time, although sometimes I will focus on specific chakras (energy centers of the body), depending on what is going on with the animal. I felt strong energy, especially coming from my hand which was near the top of her head, where the crown chakra is, which relates to the life force connection with the universe. Again, after she had enough, she walked away. Animals will tell you when they have had enough Reiki energy by moving away, but I always tell them to only take as much or as little as they feel they want and need.

After this, I showed Doris' owner Mari some of the TTouches. I had shown her some last week, giving her a bit of an overview, but this week I honed her on some TTouches that would be useful for Doris or that she would probably be most receptive to. As she is so sensitive, I thought that the LLama and Abalone TTouches on the body, which are gentle and calming, would be good, and that the raccoon TTouches around the head, as well as ear work and mouth work would also be beneficial.

At the end of the session, Doris was sitting in the window, one of the places she loves, looking very content.

Mari emailed me the next day to tell me that Doris felt really good the next morning, that her energy was good and she was giving her head butts, asking for breakfast, which was wonderful to hear. I feel like this outwardly delicate kitty has a very strong spirit. Look forward to seeing you soon Doris!
Posted by sarahsuricat at 11:33 PM