Connecting with Krishna, Days 6 and 7

Krishna is a remarkably alert, smart, soulful cat who I have been cat sitting for. I have also been offering him some Reiki when I go to visit him, as well as a bach flower remedy, both of which are helping his comfort level while his people are away. 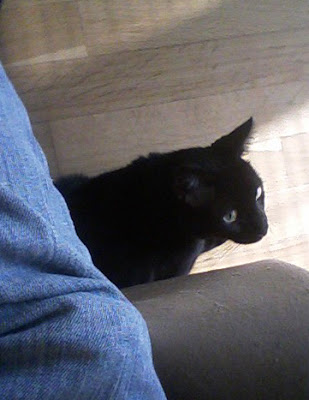 This is the longest span of time they have been away from him, and I am sure he misses them a great deal, as he is so attached to them. He generally does not allow anyone else to touch him or pet him. I feel privileged to have been able to do a bit of TTouch and petting on his head. I haven't been pushing the issue at all, sending him Reiki energy and following his lead as he comes towards me. Occasionally he will let me know with a hiss that I have gotten too close for comfort. But the past few days I have been engaging him in play and I think he has suprised himself at how close he has gotten to me, as you see above!

The day before yesterday I discovered that he was fascinated by the light that shines on the floor when I take a picture with my cell phone, so I decided to bring a small flashlight to see if he wanted to play with the light. Indeed, yesterday when I brought it out, he just couldn't get enough of chasing the light around. When we were done, I gave him one of his "actual" toys so he could feel he "caught" something.

Today , after feeding him we went into the living room area and I had put the flashlight on the floor. He came right up to the flashlight (which was right next to me) and sniffed it, pushing it a bit with his nose as if to ask me to play with him with the light. So we did - it was lovely to see him enjoying himself. I feel when I'm there with him now, it is good to allow some time for play and some time for energy work, especially as he is a young cat and he obviously enjoys getting some exercise.

Another interesting thing, I noticed that if I wanted to lure him to where I was, he would immediately respond to and follow the flashlight if I turned it on, even if he was in the process of going under the bed, which I think is a place he retreats to from time to time just to feel cozy and safe. He is definitely a hunter! and it is interesting that this instinct seems to override some of his scarediness. The flashlight seems to be a really useful tool in getting close to him, in addition to doing the TTouch and energy work. When he is playing, he sort of forgets to be scared, and often ends up sitting right next to me after the play session.

He was a bit too revved up today to try TTouch, but we'll leave that for another day. 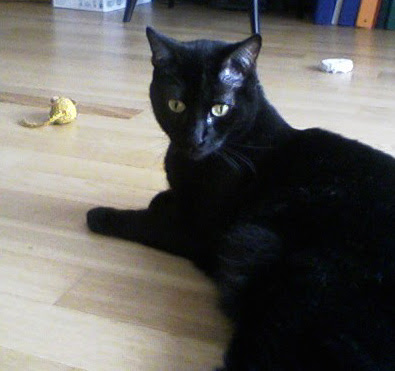 Posted by sarahsuricat at 10:42 AM