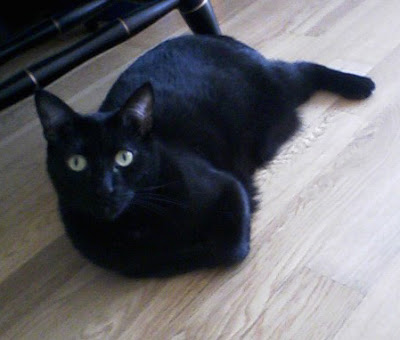 When I went to feed Krishna today, the poor boy initially seemed more stressed than he has been. I think it was a combination of missing his people, and me getting there a bit later than usual and so he was hungry. This is the longest they have been away from him, and I'm sure it is hard for him.
Anyway, there were some angry MEOWs when I first entered. I started sending him Reiki energy right away, and he started to calm, and of course after I got some food out for him he started to chill a bit more.

Once again, as I have been doing every day, I reassured him that his people will be coming back, and told him how many times it will get dark before they return. I think this does help them.

He likes to drink from the bathtub faucet and he seemed hesitant to go in there, when I realized that he wanted me to pull the curtain from the end of the tub away from the faucet instead of near the faucet, as he wanted to jump in there. So sure enough, once I pulled it there, in he went to drink his water.
Then we went into the living room, where I sat with him and offered him Reiki from a distance. First he was sitting with his tail switching, but little by little he came closer and closer to me and his tail stopped twitching. Again I had brought a flashlight with me, as he loves to play with the light from it. I had set it on the floor near me. I was trying to decide whether to play with him today or just keep calming him w/Reiki, when he let me know what he wanted to do by coming near the flashlight, as you see, and he touched his nose against it and rubbed against it. So I turned it on and he started chasing the light around. It is so interesting that he seems to realize it is all a game, that the light does emanate from the flashlight, as opposed to it being something alive all on its own. He is so smart!!
When we were done, I gave him his mouse to play with, thanked him and gave him his dry food, which he loves, so it is always a great way to end my time with him. Love you Krishna, and thanks for all you are teaching me! Posted by sarahsuricat at 12:05 PM