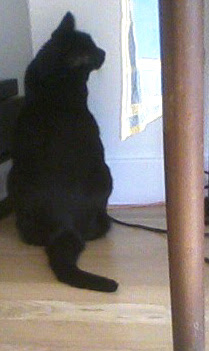 Krishna's human mom and dad were back for a day, and then went off on their honeymoon. So I went back to cat sit for Krishna today, and for the next week while they are away. I wasn't sure how he would react to me today, but he really was quite sweet. After I came in, he started rubbing himself against things, and rolling around on his back. As soon as I enter the door, I start sending him Reiki energy, and he appears to feel it and calm down.

After I fed him, gave him water, changed his litter etc I sat down with him in the living room. He seemed in a rather playful mood so I thought it would be fun to try engaging him in some play. He has a little squeaky mouse he likes, so I threw it toward him. He caught it and threw it back to me, so we continued for a while in a game of catch. So sweet! then I did some Reiki with him, and again was able to touch him with my hands briefly on his head. At one point he got comfortable and stretched his paw out to me, touching my hand.

I was getting ready to leave and took my phone out to take a couple of pictures. Suddenly he sat up and ran towards me, with big eyes. I was sitting on the floor with my legs bent, feet on the floor so there was a space under my legs, which he ran through.

I realized that my phone, when the camera function is turned on, was making a little spot of light that appeared on the floor, so Krishna was attracted by that and started to chase it. So we played chase for a bit, then I gave him one of his "actual" toys so hopefully he wouldn't be too frustrated at not being able to catch the light :)

Each time I see him, I feel like he gets more comfortable with me, but I still keep reminding myself to just take it slow and easy with him. He reminds me too sometimes! At one point I got closer to his paw than he wanted so he batted me with it, but with no claws out :) 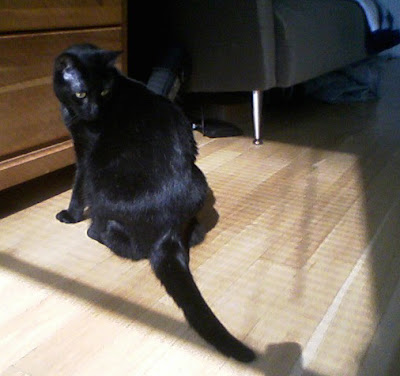 Posted by sarahsuricat at 10:40 AM