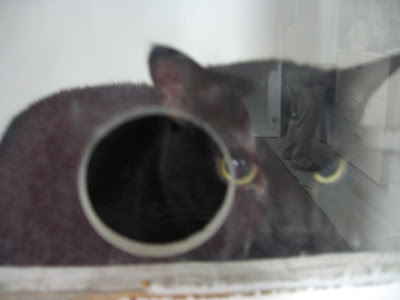 Blackie is a female kitty who recently arrived at the boarding facility where I work with the rescue cats from the Mayor's Alliance through Tavi & Friends' TTouch-in-Rescue Program. She looks a little serious in the above picture, but I think that is just a reaction to the camera, as she is actually extremely friendly. She started purring right away when I started doing TTouch on her, and as I wanted to slow her energy down, I used LLama TTouch (circular TTouches using the back of the hand) and abalone TTouch a circular TTouch done using the front surface of the whole hand. I did these quite slowly. The more slowly these touches are done, the more relaxing they can be. 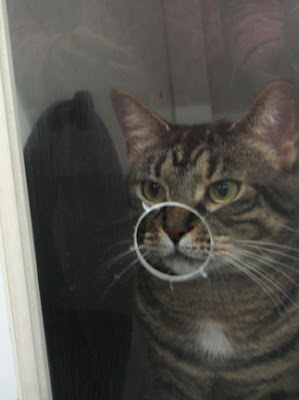 Brie tends to get over-stimulated, so I work with her quite slowly and let her dictate how much contact she is in the mood for. Our usual pattern is for me to offer the back of my hand to her, and she rubs her head against it. Then I did some chimp and abalone TTouches going down either side of her back. I didn't do this for too long, and then tried again in a bit. Then I did Reiki on her from a short distance away, maybe a couple of feet away. I could see her eyes starting to close and she got quite settled as I sent her the calming energy. 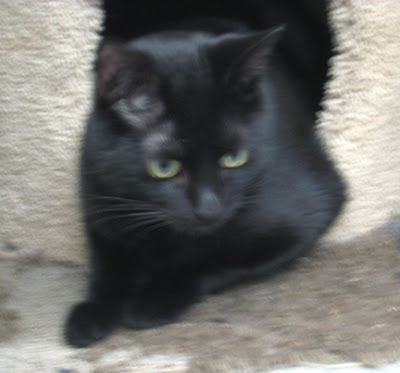 Kobie is extremely playful, and the TTouch is very relaxing to him. He is comfortable being touched most places on his body, but today he especially responded to raccoon TTouches done on the outside of the mouth. This area connects to some emotional centers of the body, so it can be extremely soothing to work there. He is an extremely gentle cat, and unlike many rescue cats, he is gentle with his paws and already seems to know how to play with people without extending his claws. I was able to do some TTouches around his paws, which can be a difficult area for some cats, but it is a great area to work if you can, as it can get a cat used to being touched there, which is helpful when you want to clip the claws.

Mack is such a sweet, friendly cat, and now is always eager to come out of his cage for some attention. I sit on the couch and he comes right up on my lap. He especially responds to ear strokes, really leaning into them. He also responds to llama TTouch and clouded leopard TTouch, but the ear strokes really bring his energy into calm focus. 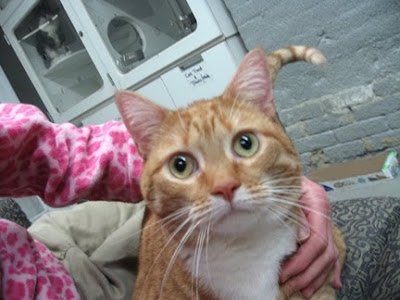 Nene is very sweet with people but seems to be a little startled and frightened of other cats. When I am working with him outside of his cage, when he sees or smells other cats, he may growl or hiss. However, after I did TTouch with him out of his cage on the couch for a while, he got SO comfortable. Sometimes he licked my hand. I did very slow abalone TTouches on his back, and he began purring and purring. I also did Llama TTouches and Noah's March with the back of my hand, then more abalone TTouches. What a sweet face. 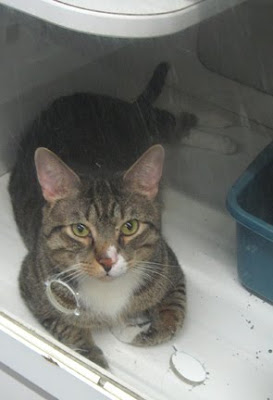 Pedro is new. He was strongly seeking attention, meowing a lot. When I opened his cage, he leaned against me, purring. As he leaned and rubbed against me, I did clouded leopard TTouches and abalone TTouches on his back. I also offered him Reiki, putting my hands first on the brachial or key chakra (near his shoulders), then held my hand slightly over the heart chakra, which can be an especially powerful energy center to focus on for rescue cats. I could feel a lot of heat there, and could feel him really soaking the energy in. 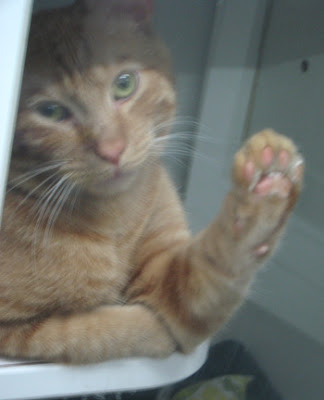 I did a half-wrap with Tango again (below see link for how to do this)
http://www.youtube.com/sarahsuricat#p/u/23/N83oXBZy0KM
Again, I put it on him a little at a time, first placing it folded across his back, then putting it on part way and taking it off, etc. until I had it all the way on him. As he has done before, he seemed a bit confused by the different sensation of the wrap. He walked a few steps, then stretched out on his side with the wrap on. After I took the wrap off, I did notice him walking a bit better, using his back legs more fully. I also did Octopus TTouch with him, which is like a double zigzag touch. It is a wonderful TTouch for connecting the body. I did it going down his front legs, around his body and then down his hind legs. He really responded to this TTouch and it appeared to make him feel very good. Before I left, I also did some Reiki with him while he was back in his cage, and I was outside his cage, about a foot away. I could see that it really was soothing to him, and he stretched out and put his paw up to the plexiglass on the front of the cage, as if to make better contact with the energy.
Thanks to all you cats! and look forward to seeing you again soon.
Posted by sarahsuricat at 11:21 AM