TTouch and Reiki at BARC shelter: update on Dr. Teeth 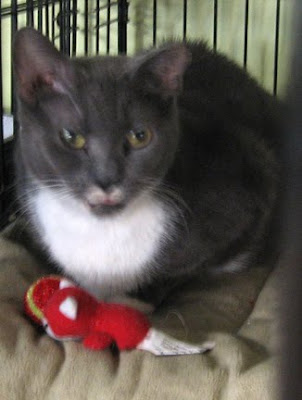 Dr. Teeth is a very shy female cat who arrived at BARC shelter some time ago along with a bunch of other cats whose owner had passed away. She was the shyest of all these cats. I have been working with her very quietly, and she has very gradually been getting more comfortable in general and more comfortable being touched.
She is more comfortable with being touched on the body than on the head, so that is usually where I start. For quite a while, I was only touching her with a long-handled paintbrush, doing little circular touches and strokes going down her body, starting just a few touches at a time, taking a break, and continuing. I could see her realizing that these touches were actually very relaxing, so she became very comfortable with me doing this.
The next step was to start incorporating touches with my hand, so I did a few touches with the brush, then some circles with the back of my fingers or back of my hand, then back to the brush, still mostly doing TTouches on the body. Then I started integrating a few touches around the base of the neck, working up to doing touches on the head.
Last Saturday I decided to try a bit of Reiki with her before I began doing the TTouches. First I held my hand slightly over her body, above one side of the brachial chakra. Chakras are energy centers of the body, and the brachial chakra is one that apparently only animals have, that is located near the two shoulders. That is a good place to start, as it connects to other energy centers. Then I held my hand slightly over her heart chakra, and this seemed to be a really important area to work, as I felt a real response and relaxation by her there. Below you will see a video of me doing a bit of Reiki with her over this chakra, and she really settles after a minute of doing this. Sorry it is dark and a bit hard to see. I alternated between doing the energy work over this chakra and doing some circular TTouches with my hand down her body, and then working in some TTouches around her neck and forehead. I felt a relaxation as a result of the Reiki that I had not felt with this cat before. 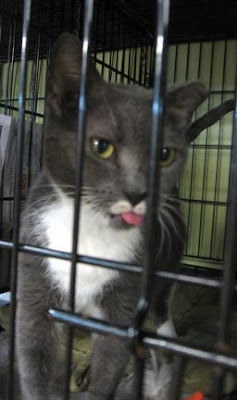 When I next came back into the shelter on Tuesday, Dr. Teeth greeted me at the front of her cage, which is something really new for her, to see her seeking human connection. When I was doing Reiki with a cat next to her, I saw her watching me, as though she was watching and feeling the energy waves.
Then when I worked with her, again I alternated between doing energy work with my hand slightly off of her, then doing some TTouches. When my hand first touches her, she still will move to the back of her cage initially, then settles into it. She doesn’t hiss anymore. And then when I do energy work with her, she starts to move forward in her cage again, settling.
When a cat starts to really settle like she is now, I can feel her personality starting to come forth, and in this case I felt that balancing the heart chakra helped me to start to feel a deeper, more tangible connection.When I left, I thanked her for trusting me enough to make that connection. I look forward to working with her again.

Posted by sarahsuricat at 11:58 PM