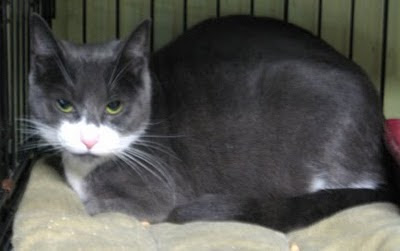 Diamanda is a young kitty who was surrendered. When she came into the shelter she was terrified, sticking to the very back of her cage. The first couple of times that I tried doing a little TTouch using a couple of the tools - first a back scratcher, then a long-handled brush that looks like it's used for basting barbeque - she hissed and batted at the tools. So I just would do a few TTouches, then back off. I did this a few times for a couple of days.
Next I tried a long-handled brush (probably used for basting barbeque) on her when she was in a sleepy mode, just stroking a little bit under her chin and small circles around her whiskers, and she really relaxed into it. The shelter was very quiet at that time, so that was helpful too. 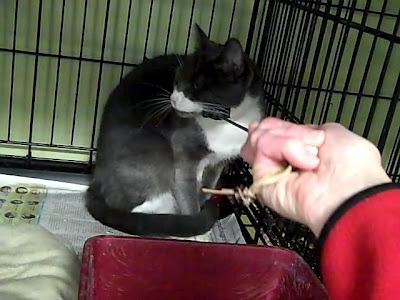 The next couple of times I continued working with her using the long-handled brush, just a little bit at a time, giving frequent breaks. Each time I put in the brush to work with her, she has been more responsive. First I start out with little circles and strokes under the chin, around the mouth area, on the top of the head and around the base of the neck. 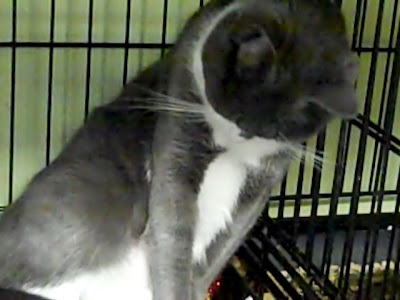 Little by little I worked in some strokes down the body as well, just doing a couple of strokes, then going back to the head, etc.

Yesterday when I went into the shelter, she was sitting alert in her cage, looking around, instead of being crouched hiding behind her litter box. Again I worked with the brush with her, and she completely stretched out her body, lying on her side, even on her back as I touched her with the brush. I worked with her several times during the day, and each time she was more comfortable. The last time I worked with her, I started doing some of the touches directly with my hand, and she didn't flinch at all. She remained in the middle of the cage, got quite comfortable, and was prompted to come towards the front of her cage to eat after I worked on her for a while, which was wonderful to see.

She also sat straight up in her cage a few times, which was a new posture for her. And something interesting, when she did this and I was able to see her more completely, I realized that she reminded me (not so much in markings, but in coloration, body shape and personality) of my sweet pal Jimmygirl, who just I mentioned recently.

Thank you so much for trusting me Diamanda, I am so happy to see you being so much more at ease. Look forward to seeing you tomorrow at the shelter :)
Posted by sarahsuricat at 6:18 PM