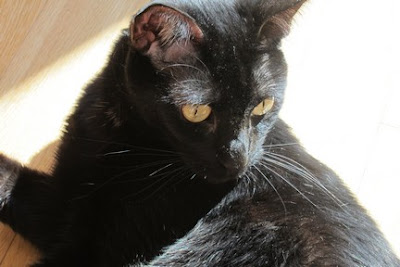 Hi folks, recently I had a call from a woman named Rebecca who had picked up my card in a local pet store.

Her lovely black cat, Krishna, is about two and a half years old. He used to be friendly with his owners and with other people, but ever since they went away on a week-long trip about a year ago (with a cat sitter staying in the apt with him), he reacts to anyone other than Rebecca or her fiance by swatting and scratching. They would love to be able to have him more comfortable with other people so that they could go away without too much of a trauma, and it would be great to have him comfortable enough to connect with friends who come to visit.

He is a highly intelligent, playful, inquisitive being, and is extremely comfortable around Rebecca and her fiance. They pet and handle him even in more touchy areas like around his teeth, etc., without being scratched.

I took with me a variety of tools (paintbrushes, feathers, wands, paint rollers, makeup brushes, a dowel with an ace bandage wrapped around it, etc), as well as two stuffed cats so that I could show Rebecca the TTouches if it was not possible to touch the cat. 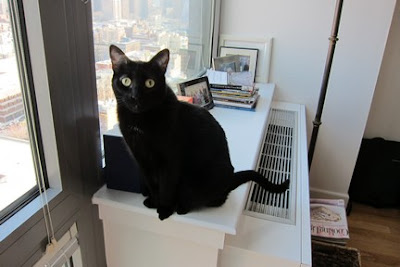 I have to admit that when I saw Krishna, I felt so pulled towards him that I couldn't help but try to touch him gently using the back of my hand, oops! He wasn't ready for that, so he did give me a swat, but nothing serious. So then I gave him a little break, and then started in the way I should have started with him, using the tools. :)

First I tried a few circles using one of the TTouch wands. He batted at it a bit. I tried a couple of times, then decided to show Rebecca some TTouches, which we did, using the stuffed animals. Krishna was watching us, very curious about the stuffed animals and about what we were doing.

Then I tried a few of the tools, to see what he was most comfortable with, and where he was most comfortable being touched. I found that he was very comfortable with a paintbrush which had a rounded tip and was not too soft, but not too stiff. I started to stroke under his chin just the tiniest bit, and do little circles around his mouth. I would just do a little bit, then stop and let him have a break for a minute, then start again. At first he was biting a bit at the brush, but as I continued, he realized that the strokes were actually feeling pretty good :)

His tail was going back and forth, but he was also blinking at me, so it seemed like he was both curious and cautious at the same time. Rebecca was very tuned in to all of Krishna's signals, it was clear how truly connected she and Krishna are.

Little by little, Krishna started to be more responsive to the little circles and strokes, and I began to work in some strokes down the body. He was coming closer and closer to me as well. I also worked with him using a thin wooden dowel with part of a 2" ace bandage wrapped around the end (in TTouch we call it a "corn dog"). Krishna was responsive to this surface as well. I did little circles on his skin, as well as rolling the "corn dog" along his body, and stroking him with it.

Krishna's tail was not whipping back and forth now, and he seemed much more calm. He came towards his food bowl, which was right next to where I was sitting, and when Rebecca gave him some food, he ate it with no hesitation or concern that I was sitting so close.

From where Krishna was at the beginning of the appointment, I thought this was wonderful progress for him. I told Rebecca to make sure that when her friends use the paintbrush or the wand and corn dog with him, to make sure to use a light touch, and just do a little at a time. I also gave her a Bach Flower remedy which combined several flower essences which should all gently work to help Krishna to be feel more comfortable and safe.

I feel confident that with a combination of them doing the TTouches on him and the friends trying to touch him with the tools instead of their hands, eventually Krishna will be more confident. I look forward to hearing what happens next.
Posted by sarahsuricat at 4:08 PM