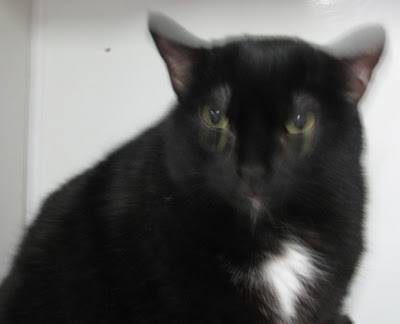 Fun day today with the Mayor's Alliance Rescue cats through Tavi & Friends' TTouch-in-Rescue program, some new cats and some cats I have been friends with for a while. It is great that the setup often allows for the cats be let out of their cages to work with them. The first cat I worked with today is Blackie. She is a cat who is sensitive being touched on her back end, she will grown a bit if you go there. I did manage to work in a few slow abalone touches in that area, gently working down her back. Then I went back to working on her upper body, and did some raccoon TTouches on her forehead, and some ear strokes. I work very gently and slowly, giving her breaks, as she is quite sensitive in general and can become overstimulated. 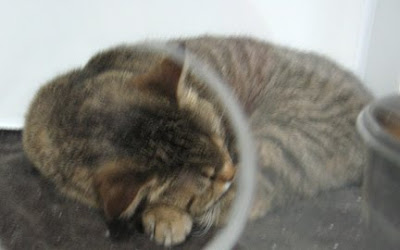 I worked with Honey a couple of times during my session there today. She is new, and was rather frightened, so I first did TTouch on her head, then did some Reiki with her, focusing on the key chakras and heart chakras. Hands-on seemed to be too intense for her, so I then moved a short distance away from her, and she was very receptive. When I came back to her later in the session, she rubbed her head against my hand as I did some TTouches with her. I kept that session short as I didn't want to overwhelm her. 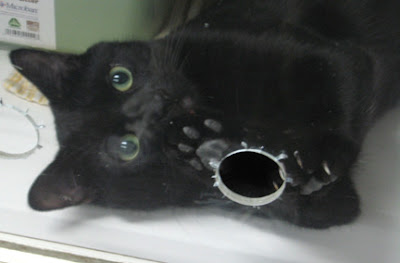 I've worked with Kobie (above) for a while, and he is always excited to come outof his cage, waiting for me with his paws up against the front of his cage. I did some llama TTouches and chimp touches on him here and there, as he was really more in a mood to play today. 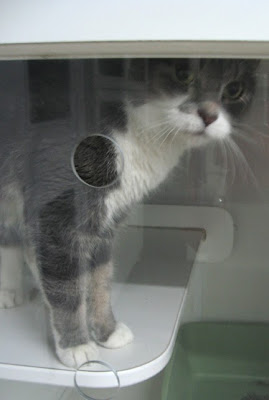 Mack is very familiar and friendly with me now, and was in the mood to play, so I mostly did some TTouches on him with the back of my hand, calming his energy a bit. 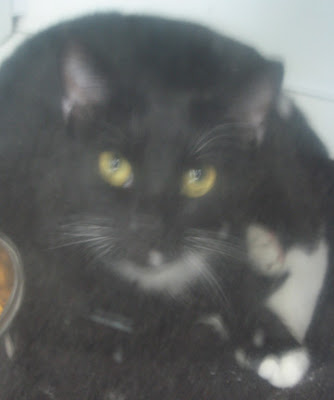 Maddie is new. She was in the back of the cage initially, and slowly came towards me, meowing when I opened the door to her cage. I wasn't quite sure whether it was a friendly meow or not so I was a bit cautious with her at first, but soon she was rubbing her head against my hand, and even sitting up on her back legs and pushing against my hand. I did Chimp TTouch, Llama, TTouch, Noah's march using the back of my hand as she came towards me and started walking back and forth, rubbing herself against me. Turns out it was indeed a friendly meow at that! 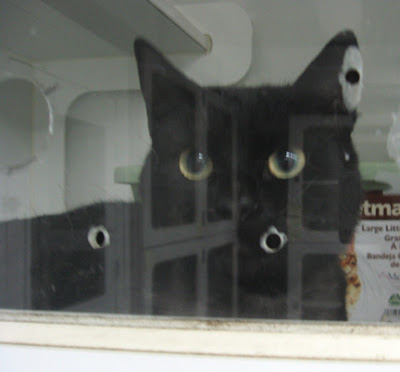 Magette was also new, and is rather skittish. I started out using a foam brush, doing little circles on the outside of her mouth area, which is a great area to work on fearful cats. She was very responsive to this. I also tried using the back scratcher with her, but she seemed to think this was too large a surface and seemed frightened of this, so I stopped. Then I was able to do a few TTouches on her body using my hand, but I kept this short. 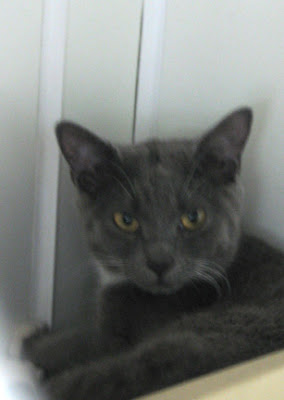 Munchie is new, and was hiding in the corner initially. I began doing some circular TTouches on him, using a plastic back scratcher, and he really responded to this. Within a short time, I was able to work my hand down the handle of the back scratcher to do some TTouches directly with my hand on him. Later I was able to do more TTouches on him using my hand, and he was very responsive, rolling around and looking very comfortable. 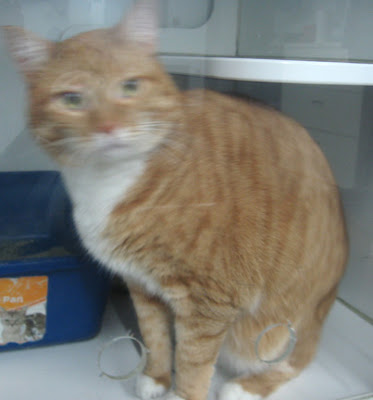 Mack is a very sweet, gentle cat who can get a bit startled around other cats. I find that with him, the TTouches he responds to the most are abalone TTouches, done very slowly going down his body. He finds these very relaxing. 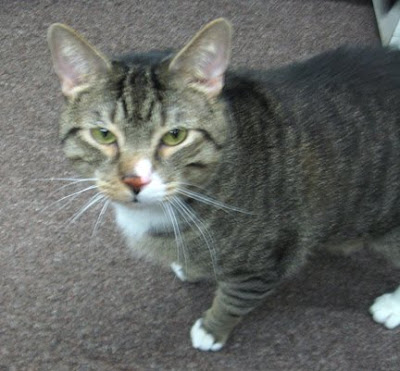 Pedro is quite a character. Sometimes he puts his paws on my chest and comes right up to say hello. I did connected clouded leopard TTouches and abalone TTouches on his body. I also found he really responded to Reiki - I worked on the key chakra, heart and solar plexus chakras, and he really settled into the energy. He can be a bit on the tense side, so this worked really well. 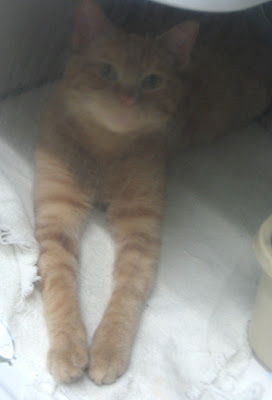 With Tango, I used the Tarantulas Pulling the Plough touch, clouded leopard TTouches down his back, and the zigzag and octopus TTouches. All of these are great for connecting the front and back ends of the body, which is especially important for him as he has a bit of an issue with his back legs, which seems to be easing up as time goes by. I also put a folded-up ace bandage across his back (instead of doing a body wrap with him using the bandage) just to remind him of his back, and help bring him back into his body. Sometimes I have done a half-wrap with him, but this time I felt that placing it over his body was enough.
Thank you one and all, look forward to seeing you soon (unless you get adopted, which would be even better)!
Posted by sarahsuricat at 11:40 AM