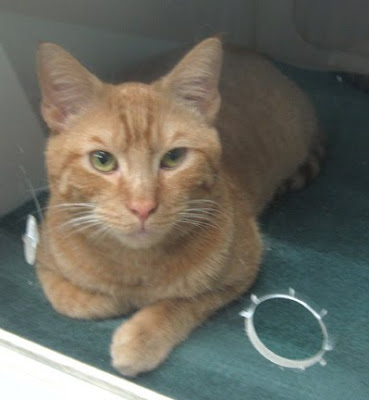 The first kitty I worked with today was Tango. He is a sweet, friendly cat, but does walk a little strangely (the vets think it could be neurological), so I have been doing what I can to increase awareness of his whole body from front to back. I did connected clouded leopard TTouches going all the way down his body and legs, as well as zigzag TTouches stroking down his legs and all around his body.

Last time I tried a wrap with him. This time I didn't get the wrap all the way on him, but I did just drape it on him several times, which did make him slow down and made his walking a bit more focused.

I also very lightly did very tiny circles with his tail, moving my hand down his tail as I went. I never pull the tail, just did very subtle, small circles moving down his tail, in order to increase his awareness down there.
Each time I see him he does seem to be walking a little more smoothly and evenly. 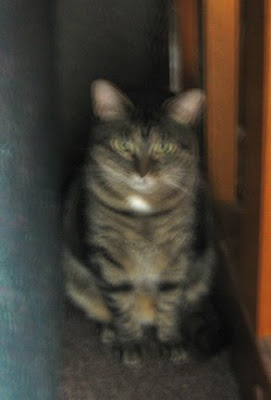 Sorry about the blurry picture above! Brie is most often more in the mood for playing than for being touched, so I let her out in the room, let her tear around for a few minutes, then sit down on the floor to see what she is in the mood for. Usually if I call to her, she will come and rub her head against me. When she does that, I do some llama or chimp touches on her head and a few strokes or circles down her body using the back of my hand. As she is quick to be over-stimulated, I most often do the TTouches which use the back of the hand, as there are less intense. When she settled into sitting in a cozy place, I offered her Reiki from a short distance away. She responded to this, becoming very relaxed, closing her eyes. 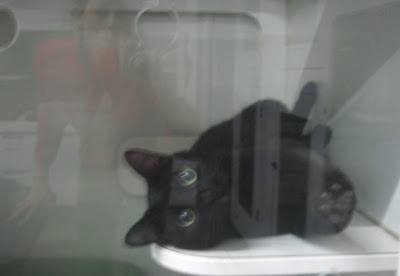 Kobie is a young boy cat, he is quite a character. He sometimes will run away when you first start to move towards him, but is actually friendly and affectionate when you touch him, and very gentle with his paws and claws. As I did clouded leopard TTouches on him, he laid down on his side. He also really responded to abalone TTouches and llama TTouches, which, since they use the whole hand, are often more calming. As he is so young, of course he is peppy, but these touches can help to make his energy calmer and more focused. 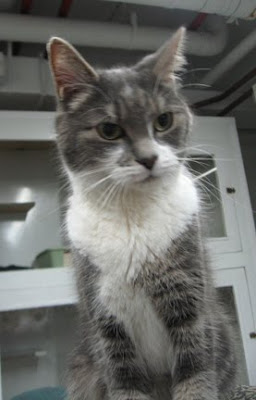 Mack, who started out a bit shy, is now extremely friendly. He waits right at the front of his cage and can't wait to come out.
I let him out of the cage, then sit on the couch in the room and he comes right up on the couch with me. I did slow chimp and llama TTouches (both are touches which use the back surfaces of the fingers and hand) in order to calm his energy down. Then I did ear strokes, which really worked to calm him. There are acupressure points in the ear, so stroking the ears really feels good for most cats. I start out with a light touch, then gauge the pressure according to what the cat responds to.
I also did some little raccoon TTouches on the outside of Mack's mouth, working back to his jaw area. These were quite calming as well.
You can find demos of a lot of these ttouches on my youtube channel:
http://youtube.com/sarahsuricat 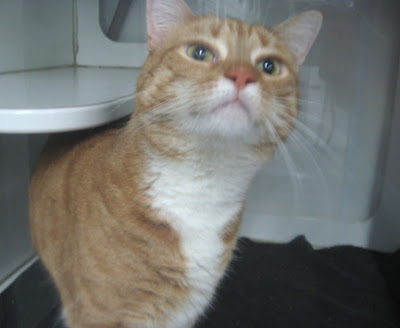 Above and below you see Nene. He is very sensitive, and can get frightened if there are loud sounds. He also seems to be cautious of other cats. He is quite friendly with me though now, though I still start very casually and slowly with him til he warms up.
The TTouch he responds most to is the abalone TTouch, a circular TTouch done using the whole hand. Many cats find the large surface of the whole hand to be very soothing. I also did some ear strokes and some mouth work with him.
He was so sweet and, as you can see below, he even gave me kisses today! 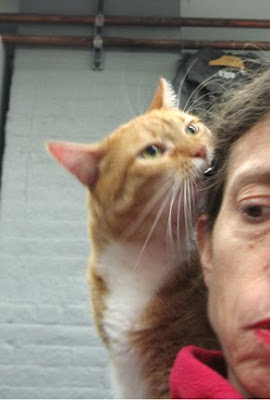 Buckley is a new kitty (see the still photo below, as well as the video).
He is actually super-friendly, but he is so excited that he can get over-stimulated and start meowing loud and hissing. So with him, I actually backed off and used a paintbrush to do TTouches on him, to be able to touch him in a less intense way, and to keep a distance just in case he decided to swat. What a funny cat! I think he was just really excited for contact. 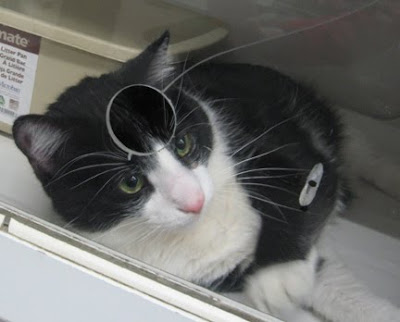 Thanks to all of these cats for how much they teach me. I look forward to seeing them soon, or, even better, to hearing that they have been adopted :)
Posted by sarahsuricat at 5:55 PM