Jesse James Gets a Bath 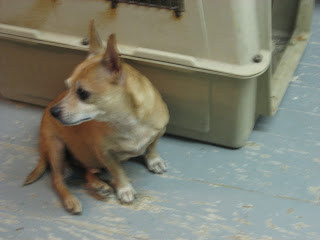 My friend and fellow volunteer Estee arranged for a local pet grooming and bath place, Puppy Love, to donate a professional bath for our friend Jesse James. So I got him ready to go out from Social Tees with a step-in harness and the double-ended TTouch leash clipped to the two side clips of the harness, giving him two points of contact. I had previously walked him around in the shelter with this setup and he was very cooperative. He also really responded the minute I brought out the leash, so that signaled to me that he likes to go out for walks! And indeed when I got him outside he was excited to be there, looking at everything, sniffing all the different smells etc. At points he did try to pull on the leash but if I spread my hands apart (each hand holding one end of the leash) or if I stroked one side of the leash then the other, he came back in balance. When we passed people, he was perfectly polite and we even passed a dog at one point, who he was curious about but as I wanted to err on the side of caution and keep him away, when I signaled to him on the lead to come back to my side, again he was quite cooperative.

When I got him to Puppy Love I told them that Jesse might get a little feisty with someone he didn't know, and they were totally unfazed. When I handed him over to the man who would bathe him, Jesse acted as though he already knew this guy. I felt very good about the whole situation so I'm sure he picked up on this as well.

When I came back to pick Jesse up, what a jolly little guy! The fellows at Puppy Love said he had been a perfect little gentleman and they gave him some treats. Jesse's fur felt so soft and he smelled great. It really did seem that he felt good being clean as well. Congrats Jesse! He's really coming along.
Posted by sarahsuricat at 9:32 AM