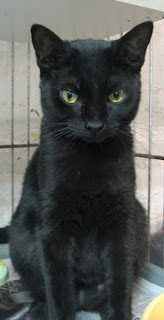 A while back I spoke about doing slow, patient work with the black cat pictured above, who I am calling Ebony. I had not been able to work with her for a while, so what a surprise I had when I opened her cage and began to do some chimp touches on her head and body and ear strokes. She had been getting increasingly friendly with me but somehow in between the last time I worked with her and this time (probably a week and a half), there had been a change in her and now she was actually rubbing herself against my hand and purring. It was strange to think that this was the same cat that some weeks ago was crouched in the back of the cage, hissing and flattening its ears when first approached. TTouch has certainly helped, but also regular contact with some of the other people who work at the shelter has been helpful. Another thing that has seemed to help her become more socialized is by having a cagemate who is a more socialized cat. We are finding that sometimes a semiferal cat can appear to learn to be more socialized when they are paired with a cat that is more friendly, though it can be not so helpful to have a cagemate who is too much of an attention hog, as that can result in the shy cat just being stuck in the back of the cage or up on the shelf. In Ebony's case, her latest cagemate who is quite a dominant boy decided that the shelf in the back top of the cage was his, forcing Ebony to hang out more in the front of the cage. I think over time she grew used to being there and that she realized that being touched feels pretty good after all! I am sending her best wishes for being adopted soon -- as you can see, she is gorgeous, with big lovely eyes and a shiny coat. 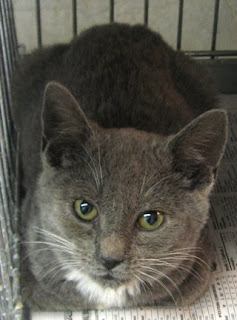 The next thing I wanted to mention is that sometimes we will get a cat in that looks just like another one who was recently in the shelter, and sometimes they even have the same temperament. The kitty pictured above we are calling Harold III (there was a Harold II, who had similar coloring but was larger, so not as similar as Harold I and III). His coloring, markings and fur texture are nearly identical to that of the first Harold that we had a while back. He also has that wise little look on his face. He was a bit more shy at first than the other one, but after a few times of me taking him out of the cage, combing him and doing TTouch on him, he does the same thing as the other one did -- he settles right down in my lap, looking very comfortable even when sometimes the surrounding pace of the shelter can be a bit hectic. I started out with ear strokes, raccoon touches around his mouth area and his head and then worked my way down his back doing chimp touches. You have to love this little guy and I'm sure he will find a nice person to give him a home soon.

Posted by sarahsuricat at 1:01 PM