Dallas (above) and Ali (below) are two gorgeous little kitties up for adoption at Whiskers Rescue Ranch in Whiskers Holistic Pet Store in NYC.

When I went there last week, both seemed very stressed out still. There had been a third cat, Doc, in the space with the two of them. He is a very dominant cat and they were both afraid of him. Dallas grew more comfortable once I began to do some TTouch with her, but she seemed to be intimidated by Ali. Ali did not want me to touch her, so I sat down and began to offer her Reiki from where I was sitting, a few feet away. She went and sat on a perch near me to receive the Reiki and both cats became more relaxed.

This past week, I tried to see if Ali would be up for some TTouch at a distance, using two long-handled paintbrushes, one for her to play with and the other to try and stroke her. First, she batted the brushes away and then she went to hide on a perch way up above, so unfortunately that didn't work so well! I think I will have to simply do Reiki at a bit of a distance with her for a while until she becomes more comfortable.

Dallas, on the other hand, was SO much more comfortable when I went this week. She came right up to me for TTouch, and after a while I could put her in my lap for a short time. She walked back and forth, rubbing her body against my hand as I did llama ttouches, ear strokes, chimp touches and abalone ttouches with her. She still keeps her distance from Ali but she does not seem to be intimidated by her presence and seems to be at ease going to whatever part of the enclosure that suits her, unlike the week before, where there was hissing on both their parts when one was near the other.

I am glad to see Dallas so much more comfortable, and will send little Ali some distant Reiki this week in hopes that she will feel less stressed after a while, and then be able to be a bit more trusting. Much love to these sweet cats! 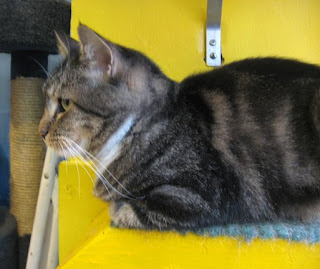