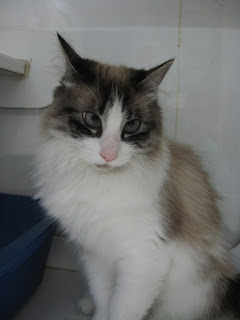 I went to work again on the Mayor's Alliance rescue cats through Tavi & Friends' TTouch-in-Rescue program. While I was riding my bike to the boarding facility, I was thinking so much about sweet Irene (pictured above) and thinking and wondering if she had been adopted. I have worked with this cat a lot and she is still a little shy but has become SO much more comfortable, she comes to the front of the cage, meowing, asking for attention. The song "Goodnight Irene" was playing in my head. This cat is so sweet!
So when I got to the facility, I found out that sure enough, Irene was aopted, hooray! I wish her all the best in her new home. 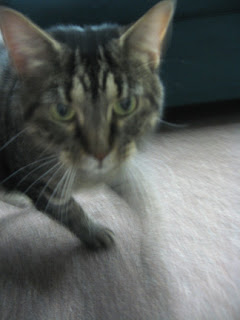 Next, I noticed that Bree (pictured above) was pawing incessantly on the plexiglas door of her cage, wanting to get out. I was only too happy to oblige. She is extremely sweet but can get over-stimulated easily, so I tend to use the more calming touches with my whole hand, like the llama ttouch (circular touch with the back of my hand) and abalone ttouch. When she started approaching a place where she seemed over-stimulated, I stopped TTouching her and began to do Reiki on her, which had a calming effect. Her energy level came down a notch while I was working with her. 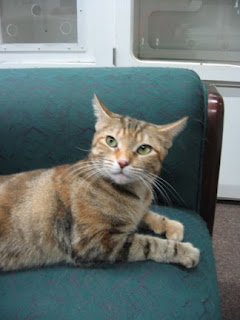 Next was Cheeks (pictured above). This little youngster came bounding out of her cage and was very happy to be out, stretching her legs and moving around a bit. As she is quite a hyped-up girl, I also used abalone and llama ttouches on her, as well as some slow zigzags. She was so sweet, putting her front paws on my shoulders as though to hug me, putting her face right up in my face. Meanwhile, most of the other cats were eager to get out, pawing at the plexi as Bree had done. This seemed to be a theme for the day. Two new youngsters, Martini and Mimosa (above) were at the shelter. I took them out one by one, and they were both extremely sociable, purring gently the entire time. I held each one and did clouded leopard, abalone and chimp ttouches, which they were very comfortable with. They were not so comfortable with the ear slides, but some cats are a bit sensitive being touched on the ears or sometimes it takes them a while to be comfortable touched there, so I will try again with them, varying the pressure to see if that makes a difference. I also played with these little ones as they have so much energy. They love to chase little toys on the end of a string! 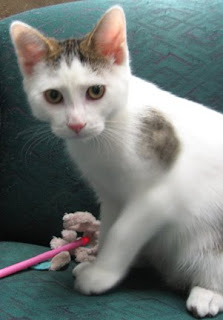 Next was sweet Oreo. She used to get very over-stimulated but has become progressively calmer and sweeter as time has gone by. As she has done before, she put her front paws up on my shoulders, bringing her face right into my face. She is a cat who really responds to ear slides, so I usually do these on her. I also did connected chimp touches going down her body to connect the whole body. what a sweetheart! 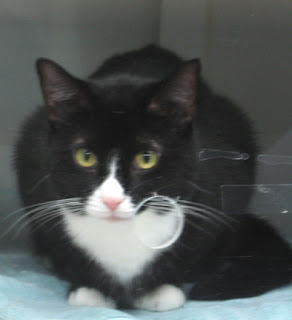 Tiger is a big tabby (sorry, didn't get a picture this time). This kitty is so calm, she preferred to just stay in her cage and relax and stretch out as I did chinp and abalone ttouches. She was purring and rubbing her head against me the whole time.
Next was Millie, a new, lovely Siamese kitty. She seemed a little shy at first as she was hanging out in the back of her cage, so I approached her with very gentle energy and started out with some raccoon TTouches on her head. Pretty soon she began to walk forward, rubbing her head against my hand as I continued doing TTouches on her head, followed by strokes with the back of my hand going down her body. She let me know when she had enough with a little hiss (no scratching or biting). I offered her Reiki, and began to see her energy calm down until she curled up for a little Reiki nap.
What happened as I offered Reiki to Millie was so interesting. When I had been doing TTouch on her, some of the cats were still quite revved up, wanting to be let back out of their cages again. Though TTouch calmed them while I was working with them, they appeared to be seeking more attention and some were pawing at their cages. While Reiki was pouring out of my hands, even though I was focused on Millie to start with, soon I noticed that all the other cats in the room were becoming very calm and sleepy, some of them grooming themselves and others curling up for a nap (see Millie and Mimosa below). After I notice this, I began to imagine the Reiki coming out of the pores of my whole body, filling the room. It was so lovely to feel such a peaceful hush in the room. 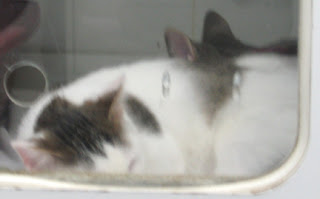 Posted by sarahsuricat at 12:15 PM